Three fantasy house plans have been selected as the winners of the Design a Beautiful House competition: a marble-clad mansion, a subterranean lakeside dwelling and a linear property with faceted bays.

The three concepts tied for first place in the ideas competition, which was organised by planning and design consultancy Barton Willmore and attracted over 660 entries.

The brief asked entrants to devise a home for a family on a 91-hectare site in Hertfordshire, England, to meet an undefined definition of beauty.

"The competition potentially ignites an array of discussions that highlight a global snapshot of ideas of 'beauty' and the 'home'," said Barton Willmore.

The competition winners were selected by a jury including MVRDV partner Fokke Moerel, Neil Porter of London firm Gustafson Porter and Mick Finch, who is course leader at the London art and design school Central St Martins.

The first design, Modern Mansion by Polish architect Maciej Grelewicz, is a simple block covered in sheets of white marble.

Described by the jury as a "well-judged representation of architectural beauty", it features a secluded leafy courtyard and marble-lined swimming pool, as well as a cinema and a basement hosting a garage and "man-cave".

"For me beauty lies in simplicity and reduction," said Grelewicz. "This project is an attempt to reinterpret the old theme of mansion and adjust it to contemporary aesthetical and functional needs."

"The design's ambition was to create house that, while being luxurious, visually pleasing and great to live in, will be also devoid of all the things that are unnecessary," he added, "a house that is not trying to follow passing fashion, but rather strives to create clear and solid presence in the landscape by using very simple means."

The second concept by students Mateusz Ploszaj-Mazurek and Natalia Okolus comprises three timber-clad volumes connected by a long semi-submerged volume with a glass front and terrace facing a lake. 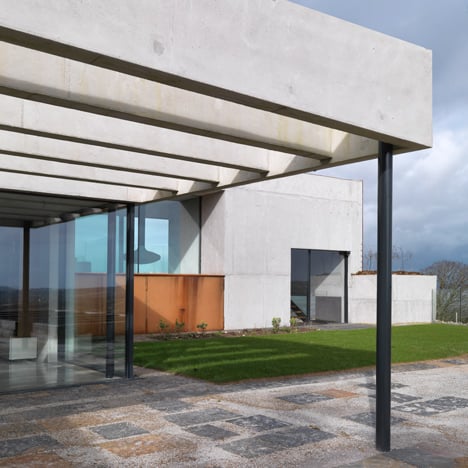 RIBA reveals shortlist for best British house of the past year

The jury praised the flexibility of the space within A Place to Be, which provides core communal areas below ground, as well as more separate quarters.

"The authors appeared to successfully integrate the home within the landscape without hiding within it, making the decision that the most ideal placement of the house was to abut the lake," they said.

For their proposal, French architects Sebastien Nuttens, Francois Derréal and Delphine Alibert devised a long block with faceted bay windows that frame woodland views. They titled the concept What is a Beautiful House, and paid particular attention to creating a sequence of rooms within the linear volume.

"Principal awards were given to teams or individuals that addressed a clear definition of beauty, both architecturally and functionally," said the jury. "A key consideration was the notion that each of the proposals had the ability to be developed further with the client for the potential later stages of the project."

Each of the three winners has been awarded a prize of £6,500 and, while there are no immediate plans to realise any of the proposals, they will meet with the clients to discuss their ideas for the site.

Other conceptual house proposals revealed recently include a project by architectural visualiser Alex Hogrefe, who drew up plans for a precarious clifftop retreat to show off his rendering skills, while Kazakh architect Aibek Almassov has planned a tubular glass house with a tree inside.