French practice Bertrand Guillon Architecture has made the most of extra height at the front of this shop in Marseille when transforming the interior into an épicerie (+ slideshow).

Located on the French city's Vieux Port waterfront, the La Sartine delicatessen, cafe and caterer is on the ground floor of a typical Hausmannian building with a double-height entrance.

The team reconstructed a mezzanine floor to fit the company's culinary studio, expanding the total floor space to 55 square metres.

As well as maximising space, they were eager to create an "innovative and punchy" concept that distanced La Sartine from the traditional Provencal food shop.

"From the first sketches, the owners and the architect agreed that it should be proposed to the customers something different from the outdated Provence grocery store," said the practice's founder, Bertrand Guillon.

"Goodbye was said to the sideboards and buffets, cerused wood and chicken wire often commonly used in the past." 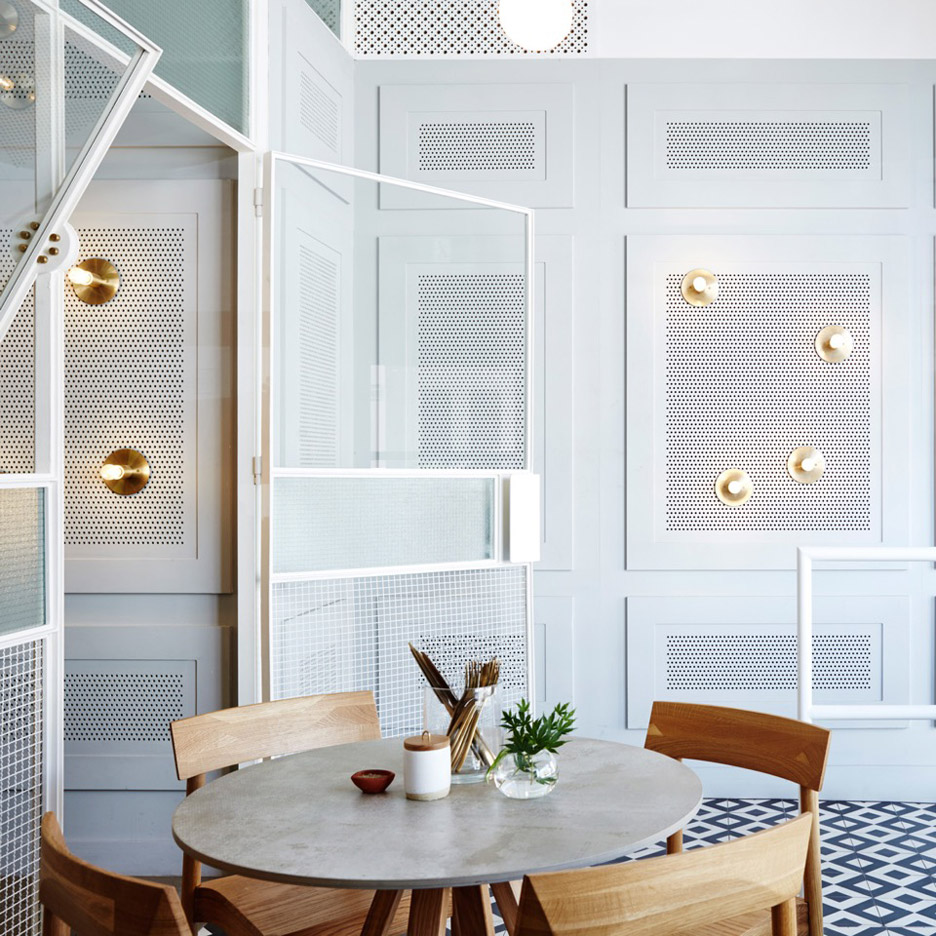 The completed interior includes a kitchen, retail space, an office, a culinary studio and a bathroom. Cafe tables are situated outside on the front terrace, overlooking the Vieux Port harbour.

The shopfront has previously housed a marine optics retailer, and the architects removed all of the existing fixtures and fittings, which were nautically themed.

Now, a white steel framework wraps around the downstairs kitchen and counter. On one side of the entrance, it reaches to the full height of the space to create shelves. Wall-mounted oak shelving in varying lengths is arranged on the opposite side of the space.

At the back of the store, the designers have installed a minimal wine cellar out of foiled steel sheets. A private office and bathroom are located on either side.

Staff access the mezzanine culinary studio via a hidden staircase behind the bar, and it is also connected to the downstairs area by a dumbwaiter.

Bertrand Guillon Architecture also renovated the building's facade, filing it back to the original board and adding a new picture window with a solar shade.

The practice worked with architect Claire Teillet and graphic designer Thomas Cantoni on the project, which was created for clients Marion and Julien Sambroni.

The Marseille waterfront is also home to a number of cultural venues, built for the city's year as a European Capital of Culture in 2013. They includes a contemporary art centre with a chequered glass facade by Japanese architect Kengo Kuma.

Photography is by Julien Kerdraon.