Schmidt Hammer Lassen Architects has completed a pavilion on the bank of Shanghai's Huangpu River, with thin metal columns surrounding a glass-walled room shaped like a cartoon cloud (+ movie).

Located on a riverside promenade, the Cloud Pavilion provides a venue for exhibitions and art events as past of the West Bund district's ongoing redevelopment.

Sandwiched between a rectangular floor and roof, curved glass walls trace a form that resembles a stylised depiction of a cloud.

This glazed room is surrounded by rows of delicate columns that alter the building's appearance when viewed from different angles. 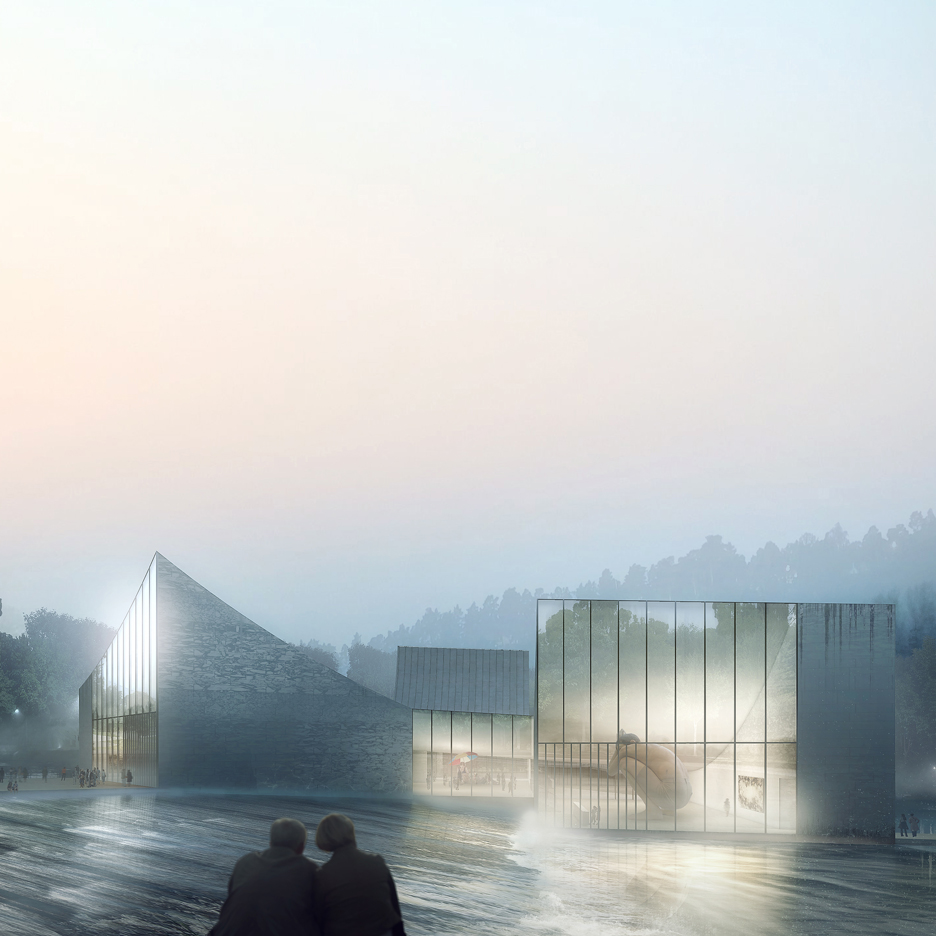 The underside of the roof is clad in reflective metal, and the ceiling can be lit up at night to suggest a cloud-shaped form hovering above the event space.

"At night the ceiling is illuminated against a reflective mirrored surface, giving the illusion of an abstract floating cloud along the riverfront, and acts as a marker for citizens to meet and rest," Schmidt Hammer Lassen design partner Chris Hardie told Dezeen.

The Cloud Pavilion is a permanent version of a temporary structure originally designed by the Danish firm for the 2013 West Bund Biennial for Architecture and Contemporary Art.

The original pavilion was only designed to last for the two-month duration of the biennial, but it proved so popular it remained in place for over two years.

The new building is based on the original design's "cloud" concept and uses a similar steel structure.

The result is intended to provide a visual contrast to the cranes and industrial surroundings of the waterfront.

"The new pavilion creates a singular space in the form of an extruded glass cloud," said Hardie.

"The cloud shape in plan directly relates to the cartoon-like form associated with how a child would draw a cloud, and how clouds are often seen depicted in traditional Chinese prints," added Hardie. "The cloud is considered a symbol of luck in ancient Chinese painting."

The pavilion provides a 150-square-metre space for hosting art exhibitions and events, alongside a compact kitchen with integrated storage.

Wood is used for the internal flooring with the intention of creating a warmer and more welcoming exhibition space.

This is complemented by the vertical timber cladding applied to the circular kitchen and storage space.

Schmidt Hammer Lassen Architects, which has offices in Shanghai, as well as in Denmark and London, is currently working on several projects in China, including the world's largest waste-to-energy power plant and a granite clubhouse and spa complex set in the middle of a lake.

Other building in Shanghai's ongoing West Bund redevelopment project include the Long Museum West Bund – a contemporary art gallery built around an industrial structure once used for unloading huge quantities of coal.

Photography is by Peter Dixie.