Traditional elements like a bell tower are reinterpreted as pointed protrusions in this sculptural church in Monterrey, designed by architecture studio Moneo Brock.

The church of El Señor de la Misericordia forms part of a new development in the city, which is located in northern Mexico.

The church is made up of shard-like protrusions topped by skylights and features a 43-metre-tall bell tower, which rises from one side of the mass to serve as a landmark for the site.

The form is not dissimilar to Gottfried Böhm's Brutalist period Church of the Pilgrimage in Neviges.

The project was designed by Moneo Brock, which has offices locally in Monterrey as well as in New York, Madrid and Santo Domingo.

"While the character of the church is undoubtedly contemporary, its volumetric concept was derived from traditional church plans," explained the architects.

"The design presents recognisable architectural features taken from early Christian temple prototypes such as the bell tower, the stained-glass windows, the frontal altar, the baptistery and the choir," they added.

The 1,600-square-metre church can host a congregation of up to 350, but an adjacent plaza can be used as an overflow space during large celebrations. 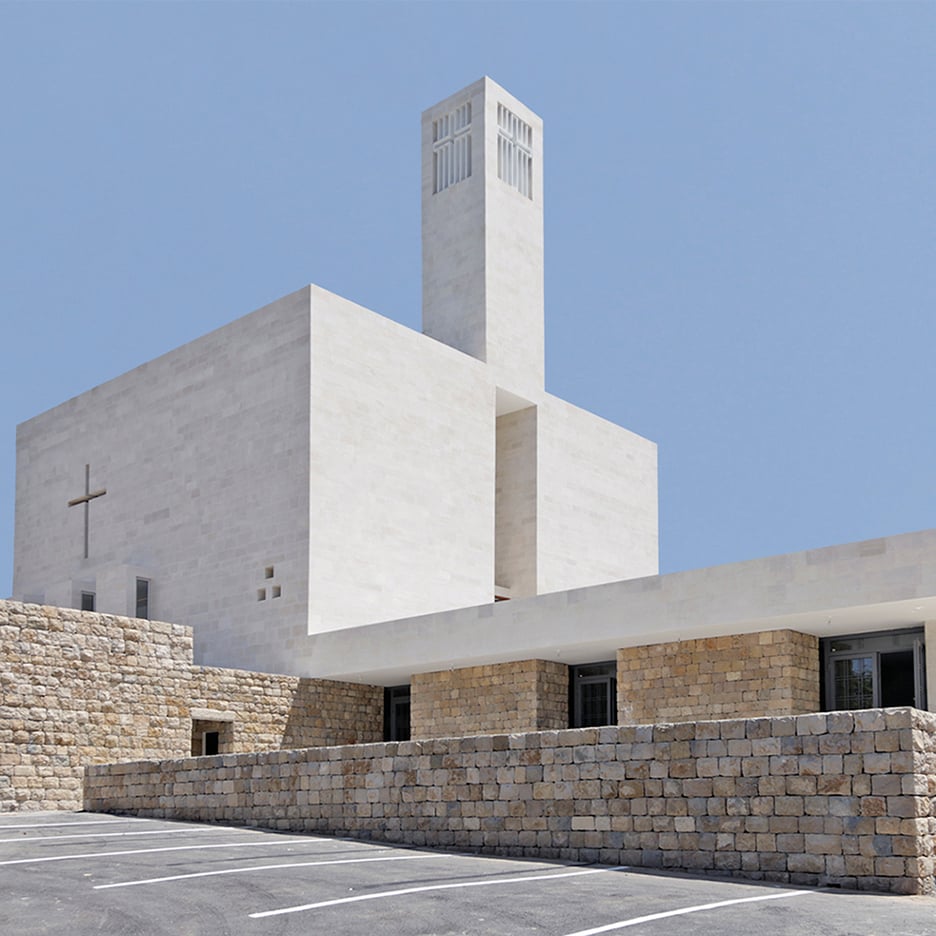 The two spaces are connected by an 11.5-metre-wide entrance, which can be screened off during more intimate services to create a serene atmosphere.

The plan of the church is intended to reference a basilica, with a wide rectangular nave at the centre facing the altar.

Above it a huge, cross-shaped window spans one wall of the church, flooding it with natural light.

"The project aims to go beyond the accommodation of religious rituals and liturgical events as currently practiced in Monterrey," said the architects, "finding references to a great heritage of ecclesiastical architecture while simultaneously remaining unquestioningly contemporary."

The altar, pews and stained glass windows were all designed by Moneo Brock, while artworks including a sculpture of Christ were commissioned from artists.

A basement level below the main congregation area is lit by two sunken patios. The church's administrative offices are set around the northern one.

Classrooms and community rooms are located to one side of the second courtyard, while on the other ossuaries and a small funeral chapel are tucked privately behind a waterfall.

Landscaping around the church, which includes several holm oak trees, will be completed in 2017.