The new exhibition space run by the Chi She artists collective provides space for art exhibitions, events and workshops at the heart of Shanghai's rapidly developing West Bund neighbourhood.

The building is located on a site adjacent to the West Bund Art Centre, where old industrial buildings converted into galleries and events spaces exist alongside new cultural facilities.

The architects retained and reinforced the structure of an existing building, which had a generously proportioned open-plan interior suited to its new use as an exhibition space.

A facade of grey bricks salvaged from the original building was added to one elevation, which incorporates the main entrance.

The entrance is set into a slightly concave opening, around which the facade bulges outwards, creating a fluid form that belies its brick construction.

The complex form could only be generated using computer software, which was then used to programme robots that accurately placed the bricks in the correct positions to create the sculptural surface. 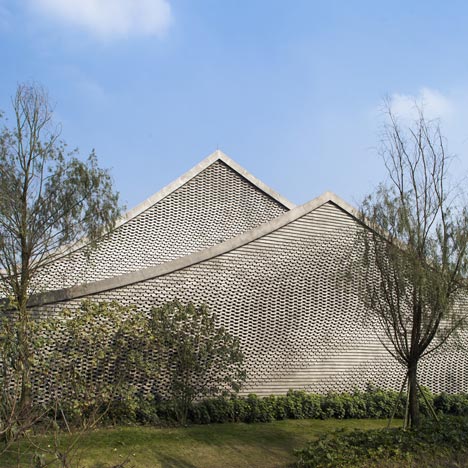 The Lan Xi Curtilage by Archi-Union

"The dilapidation of these old bricks, coordinated with the stretched display of the curving walls, are narrating a connection between people and bricks, machines and construction, design and culture," said the architects.

Uplights integrated into the adjacent paving highlight the wrinkled surface. Above the three-dimensional section of the facade, the brickwork is laid with a randomly perforated pattern that adds a further element of textural detail to the elevations.

A new roof added to accentuate the sense of height inside the building features a jagged profile, which rises and falls to incorporate various pitches, and north-facing clerestory windows.

"The roof has been replaced with a lightweight and more efficient tensioning string wood structure, part of which is lifted to obtain the skylight indicating the climate change, which presents a sense of harmony," said the architects.

The ridged timber structure forms a dramatic ceiling inside the exhibition space, with lighting suspended from tensile steel cables that extend horizontally across the space.

The warm tone and grain of the wood introduces a natural element to the typical white-walled hall, which features an otherwise raw and industrial material palette.

Archi-Union Architects regularly experiments with complex forms and innovative building technologies in its projects, which include a restaurant and members' club with wavy brick facades and an art gallery with a twisted staircase connecting its various floors.

Photography is by Shengliang Su and Bian Lin.