The range includes a daybed that sits on a brass plinth and features cushions in contrasting colours. A cut-out section "seductively" carved into the seat allows the cylindrical pillow to slot neatly into place.

The Mass sofa similarly rests atop a brass base, which allows a set of four modular cushions, upholstered in Kvadrat fabric, to be rearranged as needed – forming a large shared seat, or separate sections for individuals.

The extra space in the base doubles as a side table.

The pair's final piece is a space-saving pullout bed. A concealed sliding brass platform slides out to offer enough room for two to sleep.

"The mass of the furniture pieces juxtaposes and grounds the lightness of the space," said Lim + Lu, who set up their studio while living in New York.

Having relocated to Hong Kong, Lim + Lu's self-designed apartment is both a living space and showroom, created as an alternative to the prevalence of industrial chic.

The duo incorporated patterned tiles, flashes of pastel colour and furniture with reflective accents – including pieces from their Mass collection.

Each piece from the series is available in a range of fabric options from the studio's own site.

As well as the duo's own home, Lim + Lu has completed several interior projects, including a brightly coloured restaurant in their home city, and a more restrained apartment in New York. 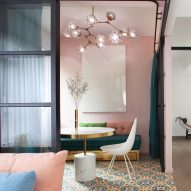