This loop-shaped lamp was inspired by a mini-golf obstacle spotted by designer Timo Niskanen while on a late-night dog walk.

Designed for Helsinki-based brand Himmee, the Loop Giant light will launch at this year's Stockholm Furniture Fair next week.

Intended to be viewed as a sculptural piece, the Loop Giant is a scaled-up version of a table lamp that the brand launched the previous year.

"We decided to try creating the light fixture in a more compact form at first," said Niskanen, who is also Finnish. "Now we get to create art."

Standing at almost two metres tall, Loop Giant has an aluminium body with LED lights placed under its inner surface. It will be produced on demand, and will be available in either black or white.

Its shape derives from an obstacle Niskanen saw on a mini-golf course while walking his dog.

"Late one night Niskanen was walking his dog near the local mini-golf course," explained Himmee. "He suddenly spotted a loop-shaped mini-golf obstacle protruding from the snow."

"Timo had seen this obstacle many times before, but that night he saw it with completely new eyes. The basic shape of Loop was born in an instant."

Loop Giant will be on show for the first time at the Stockholm Furniture Fair from 7 to 11 February.

Other interesting designs to come out of Finland recently include a collection of chairs using only black-stained solid ash wood and a series of concepts for household products that aim to "simplify and clarify" existing models. 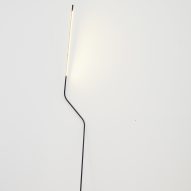