Studioshaw has won an ideas competition for the Scottish city Dundee with its plans for a sunken courtyard to race drones and prototype virtual reality games.

Sponsored by the Dundee Institute of Architects (DIA) and the Scottish Enterprise, the Seabraes Yards Sketch Design contest called for a new public facility for children and young people at the Digital Media Park in Seabraes Yards.

As part of this, Seabraes Yards, a former railway depot, is being transformed into a new mixed-use development for the city's growing digital media and cultural industries.

"Within the technology industries, prototyping is incredibly important; to test, get feedback, iterate and collaborate," said the architects. "There is a constant need for people to participate and give feed back to these innovations in order to make these products viable to take to the market."

"We thought long and hard about how to capitalise on the city's thriving creative industries and also create a fun and dynamic space to host activities such as drone racing and outdoor digital theatre," they added.

The lowered, triangular courtyard would be protected by a large roof, as well as blinds and curtains. Shipping-container pavilions arranged around the triangular space are designed to host a flexible programme, like social areas, bars and restaurants, and protect the square from wind.

Stacked shipping containers create the adjacent to tower for offices and meeting spaces, that offers workers in the technology sector the chance to exchange ideas. The tower is intended to landmark the area, and as well as offering views of the Firth of Tay and adjacent city centre.

The competition jury selected the project for its high level of imagination, as well as its uniqueness to Dundee.

"Studioshaw's proposal also recognised the way the site could be enhanced when related to adjacent proposed and completed architecture by continuing a plug and play approach to development," said Ged Young of the DIA.

"The architects hybrid solution of 'pod' built pavilion and delicately balanced gathering space was considered strong, industrial and without compromise and was our clear winner."

Other key developments along the waterfront area include an incubator building made from shipping containers and designed by AIM Design. Last year, Nicoll Russell Studios also completed a new footbridge that connects the regeneration area to Dundee's riverside.

The Seabraes Yards Sketch Design competition was one of hundreds of events taking place across Scotland as part of the RIAS's 2016 Festival of Architecture, a key part of the Scottish Government's 2016 Year of Innovation, Architecture and Design celebrations. 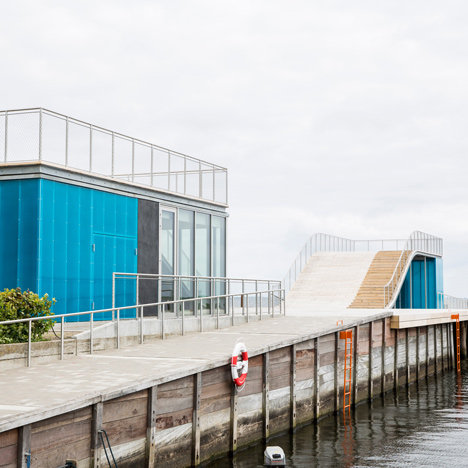 More architecture and design in Dundee