Dezeen promotion: BD Barcelona Design has teamed up with designers Fredrik Färg and Emma Marga Blanche to release a cabinet that is put together using the pair's wood-tailoring technique.

The cabinet is made up of veneered wood sideboards in a natural ash or black varnish finish, resting upon legs structured from lacquered steel.

To decorate the doors with a swooping pattern, Färg & Blanche utilised their stitching technique, which involves fixing together hard materials – such as wood  – using a heavy-duty sewing machine usually used to create car seats.

They first debuted work produced from the process at 2014's Stockholm design week with their Pocket Cupboard. It featured steamed wood bent into place.

"Since we opened our studio we have been experimenting with extreme sewing technology for some of our projects," said the Swedish and French design duo.

"We wanted to go a little further and try it with a harder material. Our way of designing is to look for new production processes and different ways to use the materials."

The cabinet marks the second time that BD Barcelona has worked with Färg & Blanche. It follows on from the pair's Couture Armchair, which was unveiled at last year's Salone del Mobile in Milan.

The Couture Armchair is made up of layers of thick plywood that have each been stitched together, with sewing details on the upholstery intended to represent a topographical map.

It is now available in a walnut version and has since been rereleased in new fabrics.

"We wanted to create an armchair with a strong focus on the pattern created by the seams and where the craft is really visible," said Färg & Blanche. "The use of a gradient amplifies the effect of the layers and the feeling of attaching two hard materials together."

To find out more about BD Barcelona and to purchase products from the Couture range, visit the company's website. 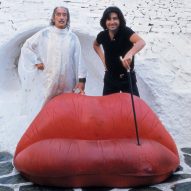