The three-piece XY 180 collection is designed around a hinged fixture that allows different elements to be moved and connected together, so luminaires can be arranged in variety of geometric patterns.

The lighting is intended to reference OMA's architecture, in particular, the Dutch studio's "fascination with point, line and surface".

"As individual components, each part is familiar," said the firm, which is led by architect Rem Koolhaas. "When assembled, however, they can take unpredictable and asymmetric positions."

OMA's lights were presented in a room bookended by mirrors, so its twisted patterns appeared to continue into infinity.

"It was our aim to take visitors on an experiential journey, merging light, form and architecture," said Delta Light managing director Jan Ameloot.

The lights are intended for workspaces, but could also be tailored for domestic or public areas.

"By exposing the luminaire, the light becomes the main feature, able to shift and generate into multiple configurations; a product that can contribute to the manifestation of space, not only by the light it emits, but also by its physical presence," added OMA.

Delta Light also organised a programme of talks during Milan design week, including one hosted by Dezeen editor-in-chief Marcus Fairs, which included presentations by architects Bruno Erpicum of AABE and Antonio Barone of OMA.

OMA ranked at number 12 on the inaugural Dezeen Hot List, a countdown of the most newsworthy names in architecture and design. Previous OMA designs shown in Milan include a collection of rotating, sliding and motorised furniture for US brand Knoll. 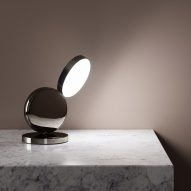