The silvery skin of Jean Nouvel's Philharmonie de Paris concert hall and the cauliflower-like balconies of the Choux de Créteil tower blocks by Gérard Grandval are among the details captured by photographer Sebastian Weiss on his last trip to Paris.

The photos are the second instalment from Weiss' ongoing Dramatis Personae series, which has previously seen the architectural photographer document landmark buildings in Portugal, Denmark and Spain.

Taken in July this year, these latest images are inspired by a recent trip Weiss took to France and feature buildings in and around Paris.

The German photographer became interested in the idea of urban areas being a "theatre of life" where the most visually striking buildings act as "protagonists".

"Dramas, comedies, or cliffhangers are performed on an urban stage every day, and we are all part of this public performance," Sebastian Weiss told Dezeen.

"When I visited [France] last year and saw very expressive and characterful buildings, I wondered why not expand this idea of public performance and consider the city itself as a theatre," he added.

"The metaphor dramatis personae is derived from this idea – the cast of main architectural protagonists on the stage of a city, which in turn provide us with an appropriate space for our daily performance."

Several of the photos have been taken from alternative perspectives to draw attention to their unusual forms.

The ZAC du Coteau building by ECDM Architects for instance has been shot from a lowered angle to emphasise the undulating balconies on its facade, while a corner of the Grande Arche in the La Défense district by Otto von Spreckelsen and Paul Andreu has been zoomed-in on to show how light and shadow play on its numerous window panes.

"I do not choose a buildings by its popularity or the recognition of its architect," Weiss explained. "Sometimes they're very simple buildings, which show fascinating details and interesting structures."

"I hope the people seeing my photographs recognise more than just a piece of architecture and perceive a unique character."

The series also hones in on the design details of well-known housing estates and residential developments. One image shows the fading, patchy paintwork on the Tours Aillaud by Emile Aillaud, while another highlights the bulbous forms extending from the Choux de Créteil towers by Gérard Grandval.

"I was fascinated by it's organic shape – it reminds me of a plant or tree," said Weiss.

Sebastian Weiss is based in Hamburg, Germany but uses his Instagram account Le Blanc to share interesting structures from around the world. His past photosets have examined the bright white structures of Santiago Calatrava’s Valencian art complex. 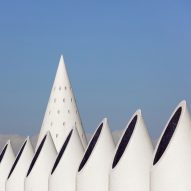