Design studio Davidpompa has carved rose-hued cantera stone mined in Mexico, and teamed it with copper to create this pair of wall and table lights.

Launched at this year's Design Week Mexico, the Ambra wall and table lamp employ cantera rosa – a pink rock formed of volcanic ashes and lava. The stone was historically used in Mexican architecture because it can be easily carved into different, precise shapes, and is also durable.

For the Ambra wall lamp, the studio cut the rock into a cylinder, which it then offset vertically from a circular copper base. An LED light slots into a hidden cut-out, creating an indirect illumination.

"With an eye catching personality, Ambra is a unique wall lamp that stands out for its minimal, unusual proportions," said the studio. "Its volumes provide an interesting downlight to interior settings by projecting the light onto the wall."

The sconce can be mounted in any orientation so that the light can shine in different ways, and the studio says it is best experienced as a series fitted on the wall.

An elongated version of the cylinder forms the base of the Ambra table light. A copper tube is fitted on top, extending slightly above, and is capped by a thinner slab of cantera that reflects the light inside. The lamp also includes a dimmer switch.

"The unusual shape fills the environment with a vibrant light, which reflects in the copper and cantera stone, as well as on its standing surface," said the studio. "It is not just about a new shape, but rather new light, a balance between material composition, and light function."

Davidpompa has previously designed a tall standing light with the pink stone and copper. It unveiled the two new lights at the Diseño Contenido exhibition during Design Week Mexico, which took place from 11 to 15 October 2017.

The temporary exhibition showcased the work of Mexican designers and stores in shipping containers erected in Mexico City's Parque Lincoln.

Volcanic stone was also used by Mexico-based Ayres to create a series of vessels, which were shown at the Inédito exhibition in Museo Tamayo during the design festival.

Ayres's vases was among Dezeen's top pick of the exhibition's emerging designers from Mexico and Latin America, with others including shapely stone vases, furniture made of wood chips and a set of balancing pendant lamps. 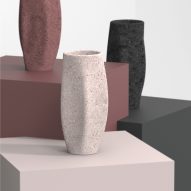