Architecture studio Bisset Adams has won a competition to design a lakeside library and community centre in southeast London, as part of a major overhaul of the brutalist Thamesmead estate.

Bisset Adams will build the Southmere Village Library to the south bank of Southmere Lake, right beside the the sprawling concrete housing estate that was made infamous by the film adaptation of Anthony Burgess' A Clockwork Orange.

The building forms part of a new masterplan for the area, put forward by housing association Peabody, to create 1,500 new homes ahead of the arrival of Crossrail.

Bisset Adams was selected ahead of proposals by Reiulf Ramstad Arkitekter, Adam Khan Architects, Keith Williams Architects and Architecture 00 in a competition run by Peabody, the London Borough of Bexley and the Royal Institute of British Architects.

Its winning proposal is for a library modelled on a swan's nest.

The library will be constructed from cross-laminated timber and is expected to cost up to £5 million to complete. The building will also include a learning space at ground level, with the potential for health and wellbeing areas on the upper floor.

"We wanted to create a design which tells a story about the lake and the environment. We also wanted it to be fun," said Bisset Adams director Iain Johnston. "The concept was inspired by the swans nesting by the lakeside."

"We used the pattern of a swan's nest as a texture for the perforated cladding of the cantilevered upper box, which faces out to the lake and created a bed of reeds for screening the children's library from the main space."

Built on the south bank of the River Thames in the late 1960s, Thamesmead estate was designed by Greater London Authority architect Robert Rigg.

Peabody, the main landowner at Thamesmead, expects to invest £1 billion to redevelop the area in the next 10 years.

Overseeing the masterplan for Southmere Village is Proctor and Matthews Architects, which is working with a team of architects and designers including Mecanoo and Turkington Martin.

Various demolition works are taking place at Thamesmead estate make way for the new library and homes. Structures set to be razed include the footbridge connecting the Wolvercote Road area to Southmere and Tavy Bridge, and the New Acres Library.

Crushed concrete from these demolition works will be re-used in the creation of Southmere Village.

"South Thamesmead estate will be refurbished and sits outside of the housing zone – the housing zone needs to be complete by 2024 but likely before that," Peabody's Benjamin Blades told Dezeen.

"[There will be] some demolition and rebuild in the housing zone with additional density. Across town – it's massive – we have another housing zone and a huge 11,500-home scheme in the Greenwich side of Thamesmead, which will not require any demolition."

Peabody expects to submit Southmere Village Library for planning permission in spring 2018, with the building opening as early as 2021.

"I think this highlights the level of investment and commitment both Peabody and the London Borough of Bexley are making to Thamesmead, but more importantly it shows that this is not just about building new homes," said John Lewis, Peabody's director for the Thamesmead regeneration scheme.

"This is about enhancing Thamesmead for the existing community, making a fantastic place to live, study, work and visit."

Southmere Village is to be set 10 minutes walk from Abbey Wood station, which will be served by the Elizabeth Line of Crossrail – a new rail service linking London with southeast England – from December 2018.

Once complete, the Southmere Village Library Building will stand opposite Thamesmead's newly refurnished Lakeside Centre, where Peabody is working with Bow Arts to run a space for residents working in the creative industries.

The centre and library are among a new wave of cultural buildings being integrated into brutalist housing estates across the UK.

Last week Carmody Groarke unveiled plans for a new arts centre and studios at the Park Hill in Sheffield as part of a significant overhaul of the 1960s estate by the developer Urban Splash. 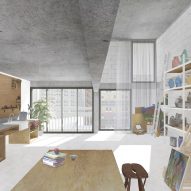