The Smithsonian National Museum of African American History and Culture has been named Design of the Year for 2017, after being described by judges as a "major turning point" in architecture.

Designed by architect David Adjaye, the African American history museum in Washington DC is the overall winner of the Beazley Designs of the Year 2017 competition, an awards programme organised by the Design Museum in London.

Completed in August 2016, the museum was designed by Adjaye Associates in partnership with US firms Davis Brody Bond, The Freelon Group and SmithGroupJJR.

The design comprises three stacked volumes – each covered in bronze plates perforated with patterns that reference the history of African American craftsmanship. It also includes a triple-height gallery and theatre set underground.

It was announced winner in a ceremony at the Design Museum today, 25 January 2018. According to the judges, it was selected for its role as a "reminder that design enables a diverse conversation and can challenge the dominant political discourse".

"Not only is this a striking and already iconic structure at the heart of America's capital, but it's the realisation of an entire century of planning, rejection, political opposition and finally collaborative execution," said Wired editor-at-large David Rowan, who was one of the judges.

"We felt that, in the context of today's strident American debate on race and identity, Adjaye's achievement represented optimism."

"It is a project of beautiful design, massive cultural impact, delivers an emotional experience and has a scale deserved of this major award," he said. "As you enter the building clouded in darkness and work your ways through the displays and end bathed in light."

As well as the overall winner, which also topped the architecture category, winners were announced in the digital, product, fashion, graphics and transport categories.

Nike's Pro Hijab designed for Muslim athletes was recognised in the fashion category, with Amanda Levete remarking that the design had "stopped her in her tracks".

"It is a piece of design that tackles an important issue in a simple and elegant way," she said. "Perfectly delivered with inclusion at its core."

A team from MIT's Self-Assembly Lab came top of the digital category, with its Rapid Liquid Printing – a form of 3D printing that can produce large objects such as chairs in a fraction of the time of regular printer.

The graphics accolade was awarded to a team from the New York Times magazine for its Fractured Lands issue.

Published in August 2016, the Fractured Lands issue was the product of over 18 months of reporting of the events that unfolded as a result of the invasion of Iraq 13 years prior. It contained a 42,000 piece by Scott Anderson, alongside 20 photographs by Paolo Pellegrin.

An Indian start-up named Graviky Labs was recognised in the product category. The team developed a method for transforming carbon emissions from vehicles and chimneys into ink, which is now commercially available in the form of pens.

A stairclimbing wheelchair designed to enable disabled individuals to reach previously inaccessible destinations, designed by a group of students at the Swiss Federal Institute of Technology, won the transport category prize.

Named Scewo, the mobility aid features a retractable set of rubber tracks that can travel up and down staircases, while a set of wheels on the rear can be raised, allowing users to engage with others at eye level.

All of this year's shortlisted projects, including a flag for refugees and IKEA's snap-together furniture, are on show in an exhibition at the Design Museum until 18 February 2018.

This year's exhibition has been designed by London architecture studio Carmody Groarke – it comprises a cave-like space made from sprayed paper pulp. 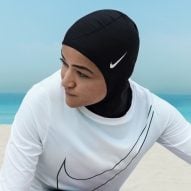