American designer Sam Stewart has created stick chairs dressed in plastic sheaths, a bed-dining table hybrid and a bench press for a "person or creature" that might inhabit a space at New York gallery Fort Gansevoort.

The Cryptid exhibition is set up in a room above Fort Gansevoort's home in the Meatpacking district.

Due to the zoning of the exhibition space as residential, already complete with a kitchen and bathroom, Stewart chose to organise the show like a living space for a fictional client.

"I had to imagine the occupation or interests of the person occupying the apartment, which ended up becoming a more inward search," he told Dezeen.

Along the mantlepiece above an arched fireplace are a clay sculptures created as 3D portraits of the imaginary inhabitant.

"The ceramic pieces are sketches of that client," Stewart told Dezeen. "They don't have ears, their features are not too specific. They were quickly made, because I didn't want to think too deeply about who this person/creature/whoever would be."

A red carpet covers the majority of the flooring, aside from a cream-coloured area under one of the pieces.

"The work felt like it needed a different staging," said Stewart. "I liked the reference to the gothic and religious red, with the tall-back chairs and the arched fake fireplace lent itself to that."

The pair of high-backed seating designs are made like traditional Appalachian chairs, typical of where Stewart grew up in North Carolina, using clusters of sapling sticks but in a much looser arrangement than normal.

The designer charred the wood with a propane torch, then wrapped each construction is a translucent plastic cover that is piped around the edges and zips open at the back. 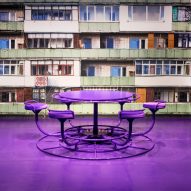 Burled wood crops in several of the designs, most prominently as the top of a dining table. A bed wrapped in tufted white leather slots underneath the table top, but each renders the other impractical.

The burled maple veneer – created from slices through the gnarled tumour-like growths found on some trees – also forms the "weights" of a cartoonish bench press.

Although the barbell is curved at each end, the weightlifting apparatus is designed to look fairly true to form, according to Stewart. The bench is covered in quilted stainless steel, while textured cylindrical elements make up the frame.

Fort Gansevoort is also presenting series of similar workout-themed pieces by Stewart at this year's Collective Design fair, from 9 to 11 March 2018.

Also in the Cryptid collection is a girthy leather-upholstered floor lamp, which curves from vertical at its burled-ash base to horizontal at the top.

At the entrance to the small kitchenette, Stewart installed yellow citronella-infused plastic curtains traditionally used at meat storage facilities – such as those that used to dominate this area of Manhattan.

Halfway between the two spaces, a treadmill base is elevated on a plinth, with its control panel is mounted on the wall beside. When turned on, the belt gently drags the yellow flaps to add sound and movement to the exhibition.

"On a more conceptual level, this represents the rituals and patterns of eating, sleeping, shopping, body image," Stewart said.