Tri Cone is a pendant lamp, comprising a pyramidal metal frame that encases a cone-shaped shade. Metal balls are located at the junctions of the metal frame, and also support a circular glass disc at the base.

Triangular shapes are continued in the glass, which is embossed to deflect the light from above in different directions.

"The light is diffused by a micro-pyramid texture in the glass, resulting in a beautiful expanse of diffused light," said Allied Maker.

For Contour Wall Lamp 22, Allied Maker designed a simple arch form, made from bent metal, with a handmade glass globe at the end. The wall lamp is set on a hinge so that it can swivel away from the wall.

"The simplicity of the form creates a geometric statement, while providing a diffused glow through the handmade globe," said Allied Maker.

Curved forms are continued in the black metalwork that bends under the four glass discs of Grand Aperture 4 – a chandelier designed for "grand spaces". 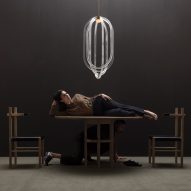 Coil + Drift's furniture and lighting is designed from a dancer's perspective

Circles can also be found carved into the round wooden shade of Concentric 15. Made with a lathe, the ridges are designed to create shadow patterns when lit.

"The shade is carefully shaped on the lathe to achieve a pleasing curvature," said the studio. "The geometry of the fixture, particularly the concentric circles, create a topographic texture in the wood that is highlighted when illuminated."

The light can be mounted on the wall or the ceiling. It comes in various wood finishes, including blackened or bleached ash, white oak and walnut.

Both the Tri Cone and the Contour Wall Lamp 22 also come in a range of metal finishes, including brass and bronze, while Grand Aperture 4 is also available in plain black.

Allied Maker presented all four designs at New York's Architectural Digest Design Show, which took place at Pier 92 and 94, from 22 to 25 March 2018.