Curved board-marked concrete walls wrap around the front of this residence in Quito, Ecuador, which local firm Estudio Felipe Escudero modelled on "the physical form of a hug".

Casa Roca is located in a residential neighbourhood in Ecuador's capital city that Estudio Felipe Escudero (EFE), a studio led by architect Felipe Escudero, describes as "full of speed and daily entropy".

The 450-square-metre house is designed to provide its residents with privacy from the hustle and bustle outside. The front wall and two sides are rounded to wrap around the indoors, a shape which the studio likens to hugging arms, while the rear wall is straightened to embrace the back garden.

"Estudio Felipe Escudero went a few steps beyond the symbolic meaning, to imagine a space that might provide, in addition to that heat, the physical form of a hug," said EFE in a statement.

"Casa Roca was born from that visual inspiration," it continued. "Its curved skin of exposed concrete surrounds the three sides of the construction and offers a cosy privacy in its interior spaces."

The concrete walls are textured with the imprints of the wooden boards used to form them. The technique has become increasingly popular with South American residences – as seen in a series by Argentinian architect Luciano Kruk – as concrete's high thermal mass helps with cooling during hot weather, while the rugged effect requires little maintenance.

In Casa Roca, portions of the board-marked concrete around the wooden window frames are polished so that they appear paler than the surroundings. The team also cut a nook into one of the curved corners to form a small terrace. 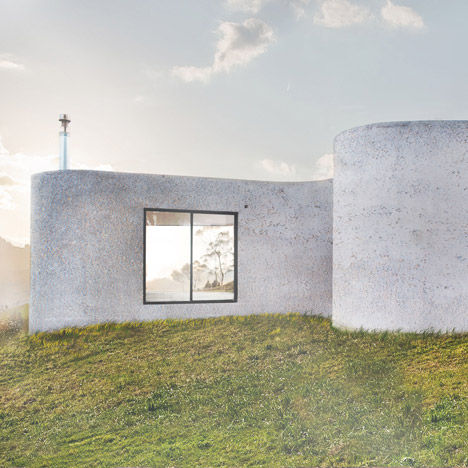 "EFE wanted to explore to the maximum the plasticity of concrete, a challenge that led its architects to highlight the curves and textures in several scales," said the studio.

Other experiments with the material include carving inlets into the lower level of walls that flank the terrace at the rear. This protects the outdoor patio – which features a barbecue for the residents to cook and entertain guests outside – from noise and wind.

A slender balcony filled with plants runs along the level above over the sliding glass doors that open to the living and dining room, and kitchen on the ground floor.

"The hug culminates in the rear facade, which opens onto the patio with floor-to-ceiling windows," said EFE. "This is where the weekend barbecues and various festive ceremonies, typical of many Latin American cities, can happen."

Concrete waffle ceiling and elements of the walls structure are left exposed, and complemented by simple finishes like white-painted walls, wood and an abundance of planting.

Among the main elements is the curved dark wooden staircase that leads up to a wooden "bridge" on the first floor, which connects the master bedroom wing from the other bedrooms on the other side.

On the ground floor, the architecture studio chose a matching tone of wood for the cabinets and dining table in the kitchen, which is set next to the open-plan living and dining area – the main social area for the family. Another bedroom is set on the other side.