Canadian design firm McLeod Bovell has created a two-storey dwelling for a sloped site with sea views, with a bright red facade and a rear volume that cantilevers over a swimming pool.

Located in West Vancouver, the Container House was designed for a couple who have three grown children and are eyeing retirement. For the spatial composition, the clients requested a compact and simplified living arrangement.

"They sought spaces that offered the ease of an apartment with the addition of inviting and sizeable covered outdoor areas," said Vancouver-based McLeod Bovell in a project description.

The clients formerly lived in a family home situated on a flat, forested property. For their new dwelling, they chose a steep site that provided the opportunity for a "bright and open house" with views of the city and the Burrard Inlet.

Planning guidelines would have allowed for a three-storey residence. The team decided, however, that two levels were preferable, as they enabled "more generous interior volumes and greater architectural possibility". Two levels also minimised the vertical travel required within the home. 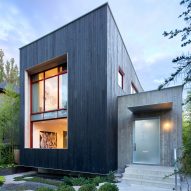 For the relatively slender site, the team conceived a 312-square-metre home consisting of rectilinear volumes, with exterior walls wrapped in grey cement-composite panels in a custom pattern. On the street-facing facade, a wall wrapped in red-painted aluminium gives the home a vibrant presence.

An elevated pathway leads to the front door, which is on the upper level. This storey contains "all of the elements essential for daily living", including an open-plan kitchen, dining area and living room, along with a master suite. Secondary bedrooms, an office and a recreation room were placed in the lower level.

A two-car garage was situated between the upper and lower storeys, which reduces the walking distance to each floor when entering the home from the parked cars.

Throughout the dwelling, spaces are meant to feel "intimately connected, horizontally and vertically". The upper floor is L-shaped in plan, with the master suite contained within a block that cantilevers over a swimming pool.

"This hovering volume projects deeply into the rear yard, providing privacy to the west and solar protection for the swimming pool that, with its dark-tile finish, mirrors the cantilevered container above it," the team said.

On the upper floor, the team incorporated a large deck with a minimalist fireplace that stretches the length of one wall. The terrace also features a sunken seating area and a ceiling wrapped in warm-toned wood. Sliding glass doors open onto the terrace.

"In good weather, when the wall of doors are open, the large covered deck significantly extends the living area of the house," the team said.

A restrained palette of materials and colours were used indoors. Rooms are awash in greyish hues, with wooden accents and the occasional dash of colour. Ample glazing brings in natural light and delivers views of the surrounding landscape.

"A window monitor and a sloped roof offer high glimpses of mountains and north light, which balance the primary southeastern views," the team said.

Since its founding in 2008, McLeod Bovell has developed a speciality for creating modern houses on steep and irregularly shaped lots. Other projects include the Sunset House, which hugs a rocky hillside in West Vancouver and looks toward the sea. 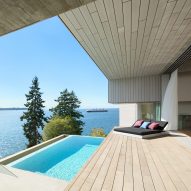