Focusing on the micro-movements people make after they sit down, Hu aimed to create a range or chairs that focus on the subtleties of body language and gesture rather than big movements.

"Micro-movement has always been studied as an important part of psychology. However, it is not specifically mentioned and applied in the design of the seat," explained Hu.

Hu, a recent graduate from the Department of Environmental Art Design at Tsinghua University in Beijing, noticed that most chairs are designed under the guidance of ergonomics. He concluded that this only meets the basic need for the body. Designing for "sitting behaviour" could lead to much more specific design.

Hu looked individually at the way people moved their upper limbs, hands, lower limbs, feet and torso when sitting and designed a set of six chairs that aim to satisfy these movements.

One chair, which features a large outer circle, allows a user to reach up with their arms and stretch by grabbing hold of two smaller rings. This shape came from an observation that the seated body often requires a good, deliberate stretching.

Another chair has arms that extend vertically outwards to allow the user to occupy space beyond the seat itself, while a third chair is designed to rock forwards to help the user stand up from a work desk when the weight of the body is already leaning forwards. 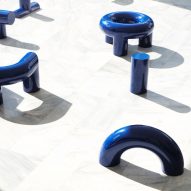 Pedals, like those on a piano, are tucked under a yellow chair to allow a user to bounce their heels up and down if their legs feel restless.

"The most comfortable sitting position is always the next position. People sit or rest while they interact with others. The weight of the body often appears to the left, right, or back."

In order to make this restless movement more comfortable, Hu designed a light green chair with a curving, padded back rest that allows the user to lean their back against the chair at any angle.

The final chair in the series has arms with silver balls to play with, to allow the user to occupy their fingers and feel more relaxed.

"The activity of the hand is very rich," he explained to Dezeen. "Imagine that holding a glass of red wine in your hand will make you more confident when you are talking with others. The satisfaction of hand movements will make us feel natural and safe."

The chairs feature graphic patterns and bright colours to show to show that they are meant to be a playful and explorative extension of simple human behaviours.

Hu's chairs were exhibited at the Design China Beijing exhibition as part of Beijing Design Week 2018, which ran until 4 October at locations across the city.

As part of the design week MAD, Penda and Open Architecture, as well as seven other Asian studios, built futuristic concept homes in the city as part of an exhibition called China House Vision.