Clay, granite and timber appear throughout the B-Raku ceramics store in Brittany, France, which connects to a Japan-inspired restaurant next door, named Otonali.

The space is situated in the port city of Saint-Malo and is the first dining-cum-retail venture of restauranteur Betrand Larcher, who has already opened a series of cafes under the name Breizh in locations including Paris and Kyoto.

One half of the site plays host to store B-Raku, which sells a selection of ceramics crafted in Brittany or Japan, the other contains the Otonali restaurant, which serves Franco-Japanese fusion food. 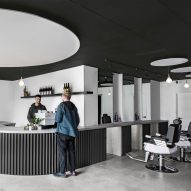 Both spaces feature interiors created by Guillaume Terver from Parisian architecture studio LeLad, who worked alongside Larcher to develop a "low-tech" aesthetic that celebrates raw and natural materials.

In B-Raku – which Terver envisioned as an "adjoining living room" to the eatery – the majority of surfaces have been covered with clay, excluding an existing stone column which has been left exposed.

Blocks of granite have then been used to form a small basin and shelf dividers in the storage unit at the shop's rear, intended to offer a coarse contrast to the delicate ceramic pieces on display.

Wooden door frames of the cabinetry that runs along the peripheral walls have been inlaid with woven panels of traditional Japanese washi paper.

"My aim was to provide a framework to the important notion of 'handmade', to create a space that gives stage to the skilled crafts and unique artwork on display," explained Terver.

Bright, white-painted surfaces appear next door in Otonali, which has been designed to "give centre stage to the chef". In front of the open kitchen sits one large oak table, where diners can communally enjoy meals and observe the cooking taking place nearby.

The back of the room is almost entirely taken up by an unfired clay wine rack punctuated by circular alcoves that store individual bottles.

Much like Otonali, Nous restaurant in Dongguan, China, is fronted by a translucent pink floristry shop, while the monochromatic Juice cafe in Toronto has a barbershop at its rear.

Photography is by Guillaume Terver.