Scallop-edged doors, vaulted storage cupboards and baby pink surfaces are just some of the features that 2LG Studio has included in the whimsical overhaul of its office-cum-residence in southeast London.

Located in Forest Hill, the four-bedroom home doubles as the chief workspace for the founders of 2LG Studio, couple Russell Whitehead and Jordan Cluroe.

While it now features a series of bright, pastel-hued living spaces, when Whitehead and Cluroe purchased the property back in 2015 it was in a state of almost complete ruin – several window frames were rotten, holes were in the ceiling and there was no central heating system.

The "grim and oppressive" kitchen was also the smallest room in the house, left with old vinyl floors and broken 1950s-era cabinetry.

This encouraged the pair to knock through the majority of the existing partition walls to form a joint sitting and dining area where they could entertain friends or work on projects.

"We began planning for the kitchen from the day we moved in, but we knew we didn't have the funds to begin the work at that time – it was more important to get the roof fixed, the chimneys re-stacked and the windows replaced," they explained.

"So the kitchen planning had plenty of time to evolve. We spent a lot of time trying out different configurations of the space and eventually decided to open it all up."

The rear of the kitchen –which was designed in collaboration with John Lewis of Hungerford – is now anchored by two vaulted storage volumes, in between which lies a similarly arched splashback. A bench seat with flecked seating cushions has been installed underneath a corner window, forming a cosy nook for reading or relaxing.

Colour is more strongly introduced in the adjacent sitting room, where a handful of walls are painted sea green. Two arched storage units where the couple keep crockery and dinnerware are also included here, mimicking the layout of the kitchen.

At the centre of the space is a pill-shaped table that 2LG Studio made from jesmonite in collaboration with artist Olivia Aspinall, which is inlaid with large chunks of turquoise aggregate. 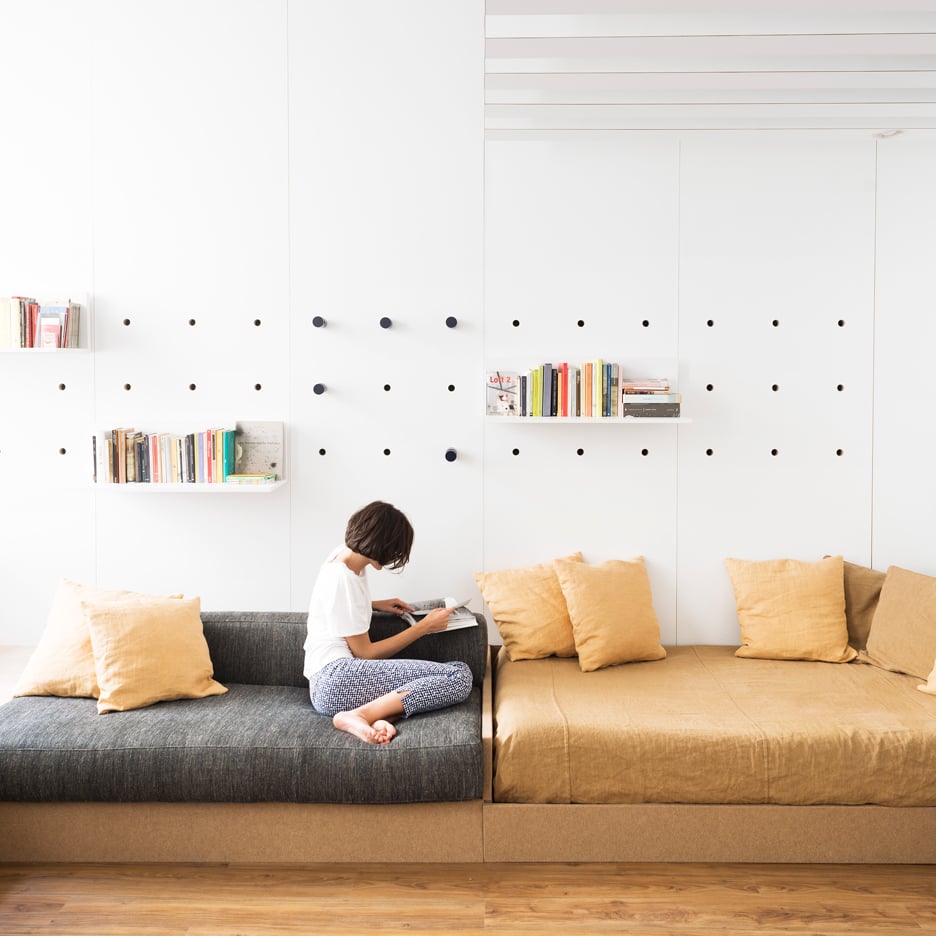 "We love to disrupt the norm and here we wanted to specifically disrupt the period setting of the architecture," the duo added. "It stops the room from taking itself too seriously."

The staircase which leads upstairs is covered with deep blue carpet in an archive pattern from 1870, the year the house was built.