California firm Edmonds + Lee Architects has converted a 1960s travel trailer into an office and crash pad for an on-the-go tech entrepreneur who enjoys spending time in nature.

Named after the German word for bullet ship, the Kugelschiff trailer was designed for a Silicon Valley tech entrepreneur who desired a highly flexible work setup. The client, Jeff Kleck, was urged by his daughter Alaina – an industrial designer passionate about sustainability – to create a mobile office.

"From that came this dream of the Airstream – a fully connective but simultaneously disconnective mobile office that could allow Jeff to focus intensely on his work in the midst of inspiration wherever he might find it," said San Francisco-based Edmonds + Lee Architects in a project description.

The client and his daughter spent a year searching for the ideal caravan. They ultimately selected an Airstream Bambi II – a rare model that was briefly produced in the 1960s. They found one in Hamburg, Germany, and had it shipped over to the US.

The client turned to Edmonds + Lee and Washington-based Silver Bullet Trailer to outfit the vehicle, with help from the client's daughter. The project offered Edmonds + Lee – a firm known for creating high-end modern homes – the opportunity to create an "ultra-condensed" environment with a heightened level of precision. 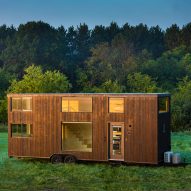 Escape One XL is a two-storey micro home on wheels

"Seamlessly integrated, multi-functional programmatic elements are something we've explored in every project, because they're an honest response to how people live their lives," said firm partner Robert Edmonds. "But in the constraints of this space, we needed to expand on that greatly, making the space not only highly functional within the spatial constraints, but also truly fluid in how it is lived."

Encompassing just 80 square feet (7.4 square metres), the caravan contains a curved room with components tucked into walls and cabinets and hidden under seat cushions. It is "a single, enclosed space that can be anything Jeff ever needs it to be", the studio said.

Walls are sheathed in white-painted aluminium, and floors are covered in boards of white ash. One end of the trailer is occupied by U-shaped banquette upholstered with Maharam wool. The seating wraps around an Eero Saarinen-designed Tulip table with a grey-veined top.

The other side features a height-adjustable desk mounted to metal pistons. The desk can be lowered and converted into a platform for a custom, pillow-top air mattress, which is stored in a drawer when not in use. Lining the sides of the room are Corian-topped oak cabinets that house equipment, storage space and a refrigerator.

The caravan has multiple power sources – solar panels, gasoline, propane and advanced AGM (absorbed glass mat) batteries. It also can tap into the electric grid. Both a Wi-Fi repeater and a cellular booster were installed to ensure connectivity in remote locales. The trailer also has smart home products from Nest, a subsidiary of Google.

"Jeff reached out to Nest, inquiring about something that had never been done before: installing the full capabilities of the intelligent Nest system into the power system that runs an independent Airstream," the team said. "The people at Nest were excited and got folded into the process, becoming partners in the effort."

Nest provided a thermostat, a smoke and CO2 monitor, a camera, an alarm system and a Google Home smart speaker. Representatives from the company came to the building site to install custom wiring, which connects to the Airstream's batteries and generator.

Hitched to a standard SUV, the single-axle trailer is used by the client when he travels for work, or when he simply desires an escape from his Bay Area home. He has parked the trailer in a variety of landscapes.

"Jeff uses the Airstream to drive out into the mountains, the desert, the beach to work and then, at the end of the day, shuts everything down and unwinds out in the middle of nowhere," the studio said, noting that more and more people in Silicon Valley are working remotely. "It seems like Kugelschiff is at the forefront of something truly revolutionary in the area."

Other modern caravans include Dojo Wheels by Belgian design office Five AM, which serves as a mobile studio, and the Drake camper by Colorado startup Land Ark, which has angled walls and black metal cladding. Escape Home has also created a recreational vehicle that sleeps up to eight and is meant to serve as a tiny home on wheels. 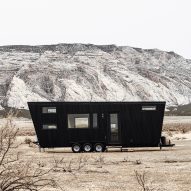