Called Electric Life, the project currently takes the form of a robot-like "living light" installation on show at Paris' Centre Pompidou, which is entirely powered by micro-organisms that excrete electrons.

The Amsterdam-based designer wanted to develop a more eco-friendly alternative to current energy and light sources that could be used in the domestic environment.

She found electrochemically active "geobacters" in the muddy soil of rivers and lakes, which emit small electrical currents in their metabolism as a waste product.

"Comparable to humans breathing out CO2, they need to constantly get rid of these, potentially useful, electrons," explained van Dongen .

After discovering this valuable quality of the bacteria, she set out to harness the energy with the help of Ghent University, by creating an environment in which the organisms can thrive.

She calls this environment a "bacteria battery", which contains hundreds of kinds of bacteria that, together, form a strong ecosystem.

Each battery features a specially engineered electrode that harvests the electrons excreted by the bacteria, which are then guided through an electrical circuit that is used to generate electricity. This system is able to power three lights per battery. 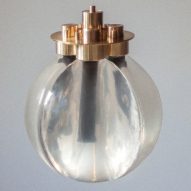 If this lighting were to be installed in the home, users would have to take care of the bacteria by feeding it once a week with a shot of tap water mixed with some acetate or vinegar.

Van Dongen believes that an added advantage is that this care-taking process would establish a closer relationship between the light installation and its owner.

Electric Life is the latest manifestation of van Dongen's sustainable energy projects, which she has been developing since 2014, showing her bacteria-powered Spark of Life pendant light at Dutch Design Week in 2016.

The Electric Life project was commissioned by the Centre Pompidou museum in Paris, where the installation will be on display as part of the La Fabrique du Vivant exhibition from 20 February until 15 April 2019 before travelling to New York's Cooper Hewitt museum and the Cube Design Museum in Kerkrade.

Photography is by Rene Gerritsen.