Frank Gehry once told Aaron Betsky that his favourite architect was actually an artist. After probing the work of late minimalist Robert Ryman, Betsky agrees that the painter's use of white made him a master manipulator of space.

When I asked Frank Gehry, for whom I was then working, who his favourite architect was, he responded in a split second: the painter Robert Ryman. In many ways it was a clever answer. How can any practitioner answer, when you make such a query, in any other way than to either pose or deflect their own work? By cutting to an artist working purely in paint, Gehry kept that option open.

That being said, it was also a perfect answer from an architect mining modernism for new forms of expression. Robert Ryman, that most material of minimalists, who could make white paint and a square format come alive just with the way he applied his material, made architecture with more success than any artist I know.

Ryman, who passed away recently at the age of 88, was never trained as an artist, kept a low profile, and had a limited range, to say the least. His complete output consisted of canvases, almost always square and usually rather modest in scale, to which he applied white paint.

The foregrounding of white was certainly not new. That non-colour, white, obsessed artists and designers from the beginning of the 20th century on. Their fetishisation of white was evident in paintings, such as Kazimir Malevich's White on White (1918); as well as in interiors, like those created by Charles Rennie MacIntosh and the MacDonald sisters); and in architecture, such as Le Corbusier's early work.

The latter even patented a particular colour white. Modernism prayed at the Church of White, and Ryman spent seven years working as a security temple at its High Temple, the Museum of Modern Art in New York.

Ryman's white was different. It had body and materiality. It was a thing, floating on, grabbing onto, or permeating another thing, canvas. It changed colour depending on how you stood or what the light was like. It was, in other word, real and even spatial.

You could try to sink into its endless space, the white of modernism that drank in all the confusion of our world of change and condensed into a place of spirituality and abstraction.

But, in the end, it would always repel you, bringing you back to the sense of being there in front of the canvas. Then you would see the brushes, the hints of colour, the layers on top of each other, the eroded grid, and you might think about buildings: a white-painted wall, its colours imperfect because of weathering or use; the way that walking through a Richard Meier building you are always aware of the grid of ceramic panels and the layering of columns and wall; or the fact that the white cube in which you usually see contemporary art is always, despite its claims at background, framing your experience of whatever you are seeing.

The most beautiful recent presentation of Ryman's work I saw was a few years ago at the Dia Foundation in New York. Small enough to let you experience and enjoy an absolutely perfectly selected array of his work, it had as its greatest virtue the absence of any artificial light.

You made do with whatever illumination came through the skylights, and you found yourself staring with ever more intensity at the paintings. They came alive in time and space as you moved towards them or waited for a cloud to pass over so you could see a particular nuance in the surface.

That is why, in the end, I found myself that attracted to Ryman's work. One of the pleasures of what we call art, as opposed to architecture, is that it is to the prose of building what poetry is to the most detailed reality or conceptual truth of our world: the more you stare, focus and think, and then repeat those activities, the more they reveal.

Yet they always remain the sparse things they ultimately are. If making the most perfect white and abstract structure was one of the holy grails of modernist architecture, then Robert Ryman came closer than anyone I know to fulfilling a version of that quest.

Am I fetishising the work of a guy who just obsessed about painting small white canvases? Perhaps, as did many viewers over his five-decade career. Many of us in the arts worship icons that, like the ones that once were the focal point of churches, reveal themselves as the centre of a rite and are packed with mystery.

We find meaning or an aura there that might be as much a result of our own desire to believe in something as it is of anything that is present. These white canvases are the nails of the True Cross, emblems and talismans as much as they have value in themselves. 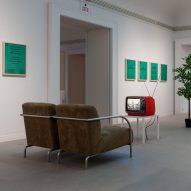 "Can modernism be explained without an architectural education?"

And yet I can think of few makers in any medium who have come closer to perfection, exactly because of the messiness and realness of the work, than Robert Ryman. To bring the spirit down, in other word, you have to make it material, let it enter into your world, without breaking the spell of the explosion of whiteness that opens and cleanses your life.

That to me is ultimately the lesson I learned from the late Robert Ryman's work: to find the white that is embodiment of all the ways modernism sought to embody the complexity and contradictions of our modern world, you have to concentrate on all that it is as colour, as material, as object.

Only then will you find a modern nirvana, embedded, sometimes only for the moment that light hits in the right way, on a small little canvas this artist left behind in a gallery.