Established by Abby Bangser, who was previously artistic director of Frieze for the Americas and Asia, the new show offers an alternative to the traditional art fair, which is typically expensive and highly regimented.

Bangser's aim with Object & Thing is to open up the art and design fair to a wider range of collectors and exhibitors. Exhibitors don't have to pay hefty participation fees, as Object & Thing makes profit on the commission of sales instead.

The inaugural fair featured a selection of 200 design objects from 32 galleries, including Friedman Benda, Matthew Marks Gallery, The Modern Institute and Salon 94 Design.

"I really started from a conceptual desire to bring together both art and design without hierarchy between the disciplines," Bangser told Dezeen.

"I thought objects were a perfect way to do this in that both artists and designers have object making practices."

Items on show included Faye Toogood's Roly Poly chair, bizarre porcelain pieces by Ann Agee, Beate Kuhn's Sensual Sculpture and a series of artist board games. Objects were sourced from a mix of emerging artists and established designers such as Ettore Sottsass and Donald Judd.

"These are not pretty decorative objects, but often beautiful, challenging conceptual works," said Bangser. "Some are functional, but not all."

"The works are a meeting place between art and design and will allow someone who decides to acquire the piece to embrace each artist's vision for what an object can be," she added. 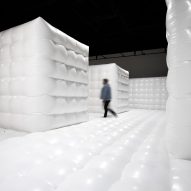 To create fluidity between the different displays, De Cárdenas installed a series of wooden tables with curved bottoms. These ranged in height and size to suit different works – larger objects were typically set atop the lower podiums, while taller structures provided platforms for smaller designs.

Translucent screens provided backs to several of these podiums and featured gridded markings that drew on the industrial window frames of the existing space.

A number of objects were grouped into themes, rather than the gallery booths found in typical art fairs.

"We have a very special cluster of artists' seating, some works grouped by themes such as nautical elements, artists' games, and vessels," said Bangser. "The totality of the exhibition is what I think is most striking, but each work in itself is also a real achievement for each artist."

Object & Thing took place at 99 Scott, Brooklyn from 3 to 5 May 2019. Works were also available to purchase on Object & Thing's website for the duration of the three-day event.

Photography is by Pernille Loof.