Burning Man has acknowledged the carbon emissions it causes and called on attendees to consider alternatives to burning, as part of a plan to become carbon negative by 2030.

The festival, which sees 80,000 people gather in Nevada's Black Rock Desert each summer, has drawn up a draft sustainability plan after calculating that its carbon footprint is 100,000 tons of CO2 per year.

"They are completely re-questioning everything," said architect Arthur Mamou-Mani, who attends the festival each year. "I think it's a very positive sign."

Mamou-Mani made the comment at the Dezeen Day conference in London last month, when he showed images of Galaxia, the timber "temple" he designed as the festival's centrepiece in 2018.

Each year the temple, along with other temporary artworks and structures, is burned at the festival.

When asked how he could justify the burning of a huge wooden structure on environmental grounds, Mamou-Mani said: "I don't think I can defend it. You know, we need rituals, but there could be alternatives to that and it's up to our creativity."

The week-long festival involves creating a high-density, car-free city on a dry lake bed called the playa. Although Burning Man has a "leave no trace" philosophy, which sees organisers and festival-goers remove all debris from the desert after event ends, organisers said they see "several critical opportunities to improve".

These include examining the ritual of burning temporary structures and sculptures.

"Burning art creates atmospheric pollution," festival organisers wrote. "We have to acknowledge that the release of these emissions is of concern."

The festival called on attendees to to consider "alternatives to burning" and help "find a way to mitigate emissions, and to be thoughtful and intentional about how/when/where and why we burn art".

Other improvements under consideration include carbon offsetting, generating renewable energy and coordinating transport to the event.

"Burning Man Project is beginning an open-source approach to become carbon negative, sustainably manage waste, and be ecologically regenerative by 2030," organisers wrote in a Medium post published this summer.

Over the next 10 years the festival aims to eliminate all non-sustainable waste streams, have a net positive environmental impact, and remove more carbon from the atmosphere than it puts into it.

"By the end of the next decade, we aim for it to be better for the ecology of Earth for Burning Man to exist than to not exist," organisers said.

Festival attendees, known as Burners, are already advised to consider the environment when setting fire to their artworks.

"If you absolutely must burn your art before you leave, there are a few things you should know, including how to burn the environmentally-friendly way, and the health issues inherent in burning," says a web page that gives advice to festival goers.

"Most importantly, do not burn materials that are toxic."

Burning Man has been held in the Black Rock Desert each year since 1991. Black Rock City, as the festival site is known, is the size of a small town and is laid out in a horseshoe formation with radiating streets.

The urban plan was drawn up by architect Rod Garrett and Burning Man co-founder Larry Harvey. "We needed urban design because it's a city," Harvey told Dezeen in an exclusive interview in 2015. 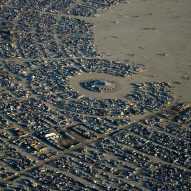 Black Rock City is designed to "sprout out of nothing", says Burning Man co-founder Will Roger

Other artworks and structures burned at the festival include this year's temple, which San Francisco architect Geordie Van Der Bosch based on Japanese torii gates, and artist Marisha Farnsworth's 2017 project, which was built from 100 dead trees to emphasise "dramatic changes occurring in our forests".

Main image is by NK Guy from Art Ablaze.