Danish architecture firm BIG has branched into smart home products with the Friday lock, which combines a minimal form and enhanced security features.

Controlled via smartphone, the Friday Smart Lock can automatically unlock a door when it senses the resident approaching, lock it as they leave, or allow them to remotely control who has access to the property.

The Bjarke Ingels Group (BIG) designed it to fit on the inside of almost any door in place of the traditional thumb turn, and it is the smallest such retrofit lock on the market. It is also the smallest product that BIG has produced to date.

The device enables users to easily issue "keys" to family, friends, Airbnb guests or delivery people, and to easily revoke them.

They can give access for a limited window of time via the app, and they can do so from the other side of the world if they wish.

The product comes from BIG Ideas, the R&D division of the architecture practice behind such buildings as Google's London campus and Two World Trade Center.

BIG Ideas head Jakob Lange told Dezeen that doors were one area of the home that clearly benefitted from the addition of connected technologies.

"I think it's a little bit strange that we are still running around with metal keys that we can lose," said Lange. "I read a number yesterday that 20 million keys are lost every year in America alone," he continued.

"And for one standard key there is only 1,000 combinations, so it's actually a super un-secure system that can be lock-picked."

The Friday Smart Lock promises the same high-end encryption and security as internet banking, making it very difficult to hack.

Unlike similar products on the market, such as the Yves Behar-designed August lock, BIG Ideas intends Friday's look to be unobtrusive and low-tech. This was a deliberate choice, which aims to design objects of "beauty and simplicity". 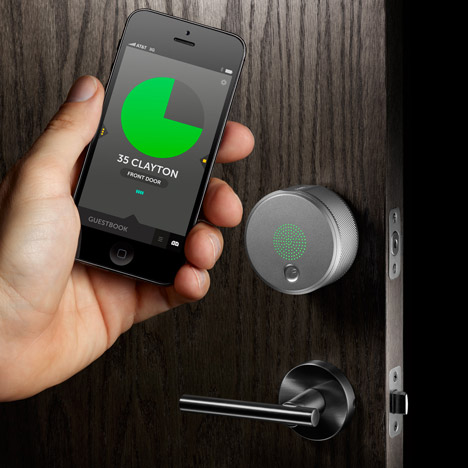 "It's kind of a reaction against all of these smart products that you see out there that almost compete to scream out about how smart they are, with blinking lights and small melodies playing and so forth," said Lange.

"In the end I don't need to know that my light switch or that the stove is smart, I just want the normal buttons, and all the smartness can happen in the background."

Friday's outward form is a 2.75-inch-wide tailpiece that replaces the existing thumb turn on the inside of a door.

It comes in five finishes – steel, brass, copper, bronze or gun metal – and has a shape supposedly inspired by the architectural form of the saddle roof – a form which follows a convex curve about one axis and a concave curve about the other.

Users can choose to keep the existing keyhole on the outside of their door or cover it over. Installation is simple and requires only a screwdriver.

While automatic locking and remote access are attractive features for users, Lange says the lock's full potential could be realised as part of a suite of home security products.

"If you pair it up with other smart products like cameras and surveillance, you can have a very secure alarm system that means everybody entering into your home can be identified and stored," he said. 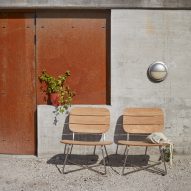 His team is now working on a smart doorbell with a keypad for code access. BIG aspires to "push the frontier" of connected home products, according to Lange.

The practice would like to include Friday smart locks on all its buildings in the future, but it will require convincing clients that the extra cost is worth bearing.

Friday is named after the companion character in Robinson Crusoe, from where the English language gets the expression "his man Friday" or "his girl Friday" for a personal assistant. It is rechargeable and compatible with Apple HomeKit and voice assistant Siri.

It is made with heritage Danish hardware brand d line as a manufacturing partner and developer Brinno as a tech partner.

Currently the Friday Smart Lock is compatible with North American and Scandinavian deadbolt and cylinder designs. BIG will release versions for other markets in 2020.