Design studio Waldo Works has completed the interiors of a penthouse apartment inside London's Television Centre, which takes cues from the "pure geometrics" of post-war British aesthetics.

The apartment takes over the top two floors of the ring-shaped Helios building in west London's Television Centre.

Having served as the headquarters for the BBC until 2013, the centre has since been converted into high-end residences and leisure facilities by architecture firm AHMM.

East London-based Waldo Works was brought on board to develop the interiors of the penthouse which, measuring 377 square metres, is the largest residence to complete at the Television Centre.

Instead of trying to channel a contemporary aesthetic, the studio looked into the context surrounding the 1960s Television Centre complex.

The Festival of Britain became a key influence – taking place in 1951, the event set out to celebrate the nation's achievements and the regeneration of its architecture, design, science and arts industries following the devastation of the second world war. 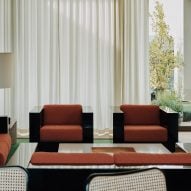 "We've been asked to do show apartments before, and it's quite difficult to 'hang your hat' on who the person is, or what the place is about," the studio's founder, Tom Bartlett, told Dezeen.

"Whereas here, you have this very strong architecture, which has both its pluses and its challenges," he continued.

"We started to look at the Festival of Britain and the graphics that it entailed, broadcasting towers, sound waves and the pure geometrics that you get from that period."

These influences are seen immediately in the apartment's entryway, which is dominated by a dramatic spiral staircase crafted from black steel.

Its form is echoed by a double helix-shaped paper sculpture from artist Deepa Panchamia that's been mounted on an adjacent wall. A glossy, circular table in a shade of what Bartlett describes as "dining room-red" has also been used to dress the space, enhancing a domestic feel.

"One of the things we needed to do with this space was socialise it and make it feel lived-in, without taking away the minimal beauty of it," explained Bartlett.

A corridor leads down to a sequence of four bedrooms, each of which are meant to offer a unique interpretation of the apartment's geometric theme.

When it came to designing the grand master suite, which is fronted by a revealing floor-to-ceiling window, the studio said it was initially "flummoxed".

"We were thinking about how big bedrooms can become cosy and a refuge, so we started looking at four-poster beds," said Bartlett.

The room's bed is now partially boxed in by a Douglas fir and hessian frame, giving inhabitants a greater sense of intimacy. A walk-in-wardrobe and ensuite bathing facilities also help break up the suite's expansive floor plan.

Communal areas are on the apartment's upper level, which has been finished with more shapely details. A grey semi-circular sofa anchors the living room, complemented by curved armchairs and curtains that have been laser-cut to feature rows of micro-sized squares.

"[Waldo Works] don't do that 'retro thing' – ever – but we do look at the resonance of spaces and where things come from, and that's really what's guided us through the interiors here," said Bartlett.

Behind a full-height fireplace lies a teal-blue dining table that's illuminated by spherical pendant lights suspended overhead. It sits adjacent to the kitchen, which has been entirely fited out with jet-black cabinetry by the original architects.

Towards the rear of the floor plan is a further fleet of rooms that are meant to have a more snug, family-orientated feel.

A secondary sitting area, which has been upholstered in deep-blue wallpaper by luxury French fashion house Hermès, accommodates a herringbone-pattern sectional sofa.

It leads through to a study that features a central brass-topped desk, merlot-red chair and a host of literary artworks.

A tall shelf filled with leafy potted plants has been used to close off part of a corridor, forming a small conservatory-style den. Styled with two pixel-print daybeds, the studio imagines the space could serve as a quiet reading nook or play area for children.

Despite the apartment's abundance of luxe details, Bartlett says it's not meant to appear as a crude reflection of the high-net-worth individuals who will be able to afford the home's £7.6 million price tag.

"I don't think any of us were particularly interested in trying to make [the apartment] look immensely rich – we wanted it to just be personable," said Bartlett.

"One of the things that people think about contemporary design is that it's not homely, but it can be."

This apartment is one of five penthouses available at the Television Centre. Creative duo Bella Freud and Maria Speake designed another one of the top-floor apartments back in 2018, filling its interiors with furnishings that channelled the "bold colour, eclecticism and glamour" of the 1970s.