Developed by a group of graduate students from Imperial College and the Royal College of Art, the prototype can be suspended from each wheel's steering knuckle, just above where the tyre meets the road, to capture the microplastic fragments released through friction every time the car brakes, accelerates or turns a corner.

These microscopic pieces of artificial rubber, called tyre wear, account for more than half of all particulate emissions created by vehicles on the road and are released into the air and waterways.

"We began the project looking at microplastics at large and were shocked when we discovered that tyre wear was the second-largest microplastic pollutant in the environment, after single-use plastic, and a major source of air pollution," said Hanson Cheng, who co-founded The Tyre Collective alongside Siobhan Anderson, Deepak Mallya and Hugo Richardson. 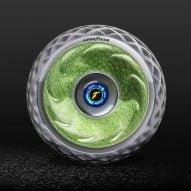 "This challenged our perception of what vehicle pollution is, as it is commonly associated with tailpipe emissions. We all know tyres wear down but never considered where it all goes. These microparticles are all around us and barely visible," Cheng added.

The team tracked Transport for London (TFL) buses in real-time to visualise the problem and calculated that the amount of rubber expelled into the environment by one bus in a single day is equivalent to the size of a grapefruit.

The Tyre Collective team originally experimented with using adhesives or vacuuming technology to attract these particles.

But through a series of experiments, they discovered that a far easier and more efficient solution was to harness the positive electrostatic charge of the tyre particles, which is created by the friction through which they are expelled.

This means that the rubber particles can be captured from the air using static electricity, in the same way that hair will cling to a balloon when it is rubbed on a person's head.

In this case, a series of copper plates integrated into the Tyre Collective's TC01 device are electrostatically charged through the car's alternator, allowing them to draw in the rubber particles.

In order to catch the particles before they enter the environment, the unit is placed in the path of the natural airflow around the spinning wheel.

According to The Tyre Collective, this allowed the TC01 to capture 60 per cent of all airborne particulates when trialled on a test rig.

The rubber particles are stored in a removable cartridge that would need to be emptied around once a month, with the waste rubber used to create new products.

"We want to challenge existing models of business and design, and envision ones focused on circularity and responsibility," Cheng told Dezeen.

"We are speaking to tyre recycling companies and developing applications for tyre wear, including reintroducing this micro rubber into new tyre production and upcycling it into footwear outsoles and carbon black, a pigment used to create inks."

Crucially, according to Cheng, although Co2 emissions are set to drop with the move towards electric vehicles, tyre emissions are actually likely to increase due to the increased battery weight.

"Future vehicle pollution will not come from the tailpipe but from tyres," he said.

That's why The Tyre Collective is hoping to partner with TFL in the future, to help meet its goal of running a zero-emission fleet by 2030.

The startup is also currently negotiating a development partnership with a global car manufacturer to look at refining the device, with the ultimate aim of integrating it into new electric vehicles. 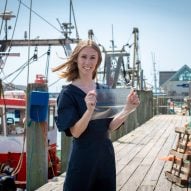 The Tyre Collective is one of 27 national winners of the 2020 James Dyson Award, with other winners including a mycelium beehive from Ireland, an "ultra low-cost" water filtration system from Mexico and an artificial voice box from Japan that is capable of replicating the user's former voice.

This list will be further whittled down to a shortlist of 20 by a panel of Dyson engineers, before one overall and one sustainability winner is chosen in November, with each receiving £30,000 in funding.

Previous winners of the international James Dyson Award range from a bioplastic made from fish waste to a turbine for generating wind energy in urban settings.