Multidisciplinary studio Lim + Lu has based the interior of Yung's Bistro in Hong Kong on the rich history of its 78-year-old sister restaurant.

Yung's Bistro is an offshoot of esteemed Hong Kong restaurant, Yung Kee, which was founded by Kam Shui-fai as a modest outdoor food stall – known as a dai pai dong – before a brick-and-mortar restaurant was opened in 1942.

Over the past 78 years the restaurant, which is still in operation, has become revered for its take on Cantonese cuisine and is particularly well known for its roast goose dish.

The newly launched Yung's Bistro is presided over by Shui-fai's granddaughter, who tasked local studio Lim + Lu with devising a contemporary interior scheme that honours the humble beginnings of its predecessor, Yung Kee.

"For this project, the client's brief is rather abstract; remembering their roots while paving the path for the future," said the studio, which is led by Vincent Lim and Elaine Lu.

"It was important that the design draws inspiration from the flagship restaurant and allows customers to recognize that this new restaurant is born of the same meticulous DNA towards food preparation and detail-oriented customer service."

A subtle mix of old and new has therefore been incorporated throughout Yung's Bistro, which is loosely divided into two halves.

The front half of the restaurant plays host to a more casual dining area. At its centre is a communal brass-edged dining table, included as a wink to Yung Kee's early days as a food stall when customers would often have to share tables because of the scarcity of space in the surrounding alleyway.

The table is surrounded by green-velvet chairs with slim brass legs, while a series of lantern-like pendant lights by Danish designer Lucie Kass dangle overhead.

A corrugated wall runs down one side of the casual dining area, serving as a backdrop to the drinks bar. The curved, C-shaped counter of the bar is clad with sea-green tiles, contrasting the pink stool seats that have been placed directly in front.

Glassware and trailing plants are openly displayed in a gridded brass framework that's been suspended from the ceiling. It's meant to loosely resemble the bamboo scaffolding which is often used in the construction of Hong Kong's skyscrapers. 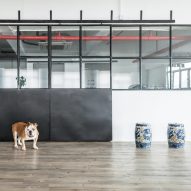 The wall behind the restaurant's cashier desk and merchandise shelves are lined with patterned green tiles with brushed-gold detailing, which were cast from tiles that were installed in Yung Kee in 1978.

A formal dining area lies in the rear half of Yung's Bistro, which monochromatic flooring and circular dining tables that Lim + Lu says are more traditional to Chinese restaurants.

Chefs can be seen bustling away at work in the kitchen through a sequence of brass windows that run down the side of the room.

"This view of the kitchen is atypical of Chinese cuisine – however, when the kitchen prepares the goose that made its predecessor one of the most famous restaurants in town, it is a true attraction," the studio explained.

Each of the windows has been fitted with a slatted screen that can be drawn down if the chefs in the kitchen want more privacy.

When drawn-up the screens almost create an awning over the dining tables, another nod to dai pai dong culture where unfurled awning typically symbolises that a food stall is open for business.

"Yung's Bistro serves as a quintessential bridge between old and new, a traditional cultural cuisine of Hong Kong meeting more western and contemporary values," added the studio. "It is a lesson in respecting what has come before, but also the courage for innovation."

Lim + Lu was established in 2015. Other Hong Kong projects by the studio include the revamp of a fashion designer's apartment, which was brightened up with pops of yellow, turquoise and coral-pink, and the transformation of an old warehouse into a home for two artists and their five pets.

Photography is by Lit Ma of Common Studio.