French architecture studio AW2 has revealed its design for a glamping resort made up of 47 luxury tents in the AlUla desert in Saudi Arabia.

Named Ashar Tented Resort, the development is set to be built as part of the Royal Commission of AlUla's drive to increase tourism in the AlUla desert area, which includes the Madâin Sâlih UNESCO World Heritage site.

The tourist accommodation will consist of 47 suites that will take their forms from the tents used by the nomadic Bedouin people who occupied the area.

"The inspiration of the architecture begins with the simple rectangle shape of the Bedouin tent, with its adjustable canvas to maximise cooling and provide sun shading," said AW2 partner Stéphanie Ledoux.

"From this basis, we developed a layout that would include all the modern functions of a luxury hotel room while maintaining maximum contact with the surrounding nature," she told Dezeen.

"The canvas is here used as a protection and privacy device."

The resort will be arranged along a path that follows the site's surrounding rock formations.

Each suite, which will either have one, two or three bedrooms, will be constructed with compressed-earth brick walls and topped with a tented structure.

"The site is composed of three main elements: the sand, the rocks and the vast sky," explained Ledoux.

"These components are used as layers in our architecture: the sand is the platform on which we build, the rocks are the inhabited spaces, the tented roofs are the protective 'sky'."

Alongside the tented suites, Ashar Tented Resort will also have two restaurant buildings and a spa, which will all also be made from compressed-earth bricks.

The spa will include a pool within the surrounding rock formations.

"The spa will bring guests another step closer and literally inside nature," said Ledoux.

"It will be the epitome of the architecture experience with treatment rooms facing the rock cliff creating an exclusive sanctuary," she continued. 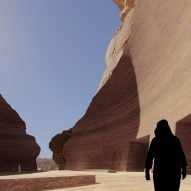 AW2 designed the scheme of Ashar Tented Resort with the aim of limiting its visual and environmental impact on the AlUla desert.

"The visual impact of the tent is limited by the low and soft curves of the canvas which complement the sandy dunes," said AW2 partner Reda Amalou.

"The buildings are otherwise environmentally efficient, with the canvas acting as a double layer to create natural cooling between the roof and the tent," Amalou told Dezeen. "All walls are finished with a locally sourced mud coating."

The resort, which is set to open in 2021, forms part of a wider strategy to encourage international tourism in Saudi Arabia.

"The project is at the heart of Saudi Arabia's strategy to open the country to international travellers," explained Amalou.

"Ashar Tented Resort will be the first international standard resort in AlUla. It aims to create a statement in hospitality for visitors to the AlUla world heritage site."

French architect Jean Nouvel is designing a subterranean hotel that will be carved into a sandstone hill as part of the development of the AlUla desert.

Also as part of the country's tourism push, Kengo Kuma and Foster + Partners are designing "world's most ambitious tourism development" on a series of islands in the Red Sea.