Cycling shoes are tucked into all-black shelving in this boutique spinning studio in Montreal, Canada, designed by locally based Ivy Studio.

Black runs heavily throughout the 1500-square-foot (139-square-metre) studio but is intended to provide a different atmosphere between the calming lobby area, with lockers and changing areas, and a spin room for "excitement and energy".

"Although both areas are united by the brand's all-black colour palette, they each suggest opposing ambiances," said Ivy Studio.

ELMNT's space, which occupies the ground floor of a residential building in the city's Griffintown neighbourhood, features exposed concrete columns and concrete floors in the lobby.

This is teamed with built-in furniture made from black stained oak and reflective laminate.

Among these is a black wooden bench leading from the entrance door along a glazed wall and then around an existing column. A black plant pot filled with greenery is tucked into a nook on the other side of the column. 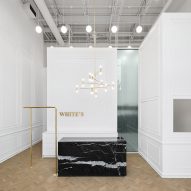 Facing the bench is a curved black wall that wraps around the studio's gender-neutral changing rooms, including four showers covered in black tiles.

Before entering the studio, class attendees pick up their allotted spin-bike shoes – specially designed to click into the bike pedals – from black shelving. They can also store belongings in black lockers and fill up their water bottles from a cylindrical black fountain.

The spinning room is intended to provide a more electric atmosphere.

"A series of color-changing LED lights span across the ceiling from one end to the other," said Ivy Studio. "The walls are surfaced in acrylic mirrors that distort the reflections of their subjects."

Ivy Studio is led by architects Gabrielle Rousseau and Philip Staszeksi in Montreal.

The firm has completed a number of interior projects in the city such as a dry cleaners that is modelled on a Parisian apartment, a grungy, tropical restaurant and a stark white boutique.