Paint buckets, street signs and beaded car seats feature in a series of found seating designs, made by working-class migrants in the United Arab Emirates and collected by artist Christopher Benton.

Displayed as part of the artist's How to be at Rest installation at Dubai Design Week, the eight chairs were spotted at businesses in the industrial neighbourhoods that fringe major cities such as Dubai, Abu Dhabi and Sharjah.

Benton collected the objects over the course of two years and purchased them from the owners.

Most come from nearby South Asian countries in the hopes of finding employment and supporting their families back home. As a result, money is saved to send back rather than spent on furnishings.

"The makers who live in these areas are carpenters, tailors and upholsters, chiefly from India, Bangladesh, Pakistan and Afghanistan – places where the frugal innovation and 'making it work' can be essential to your livelihood," Benton told Dezeen.

"It's their way of 'design thinking'. They would make objects that defied gravity or taste – but they never defied logic."

In pursuit of ultimate comfort, the owners of the Al Khat Al Thahabi Auto Accessories & Upholstery shop in Dubai kitted out a cantilevered dining chair with a grinning emoji pillow, strapped into place using a beaded car seat cover.

Other designs focus on repairing broken seats through whatever materials are at hand at the time.

An office chair is cemented on top of a paint bucket and padded out with a fringed seat and majlis floor cushions, while Dubai's Classic Car Accessories shop replaced the missing leg of a wooden dining chair with a PVC pipe and fixed automotive upholstery in place as cushions with zip ties. 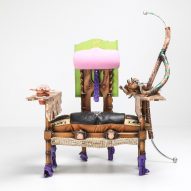 These chairs embody both the trades and the practical needs of their makers, who are also the end-users.

"The chairs in the exhibition are representative of what we've been calling improvisational vernacular – everything is essential, with form following function using an economy of gesture," said Benton, who moved to Dubai from the US.

"Everything lasts forever through a process of repair, refurbishment and renewal. And everything exists in its time and place, where context controls the design."

According to Benton, the designs also reveal something about the UAE, which is experiencing rapid economic growth and urbanisation largely propelled by its oil reserves and the exploitation of cheap migrant labour.

Perhaps the best example of this is a chair found at a carpentry shop, which features a Barcelona-style base with an old street sign repurposed as the seat and backrest.

"It's a perfect microcosm of the narratives that surround the neighbourhood where I found it. In Satwa, many roads are closed because the city is knocking down affordable old homes in favour of new towers, so there are old street signs everywhere," he said.

"On the back of the street sign, there are pasted-on ads for bed spaces, which are shared bedrooms that comprise most of the original housing in the area. All of these economic forces you can see in one chair."

At Dubai Design Week, the seating is being shown as part of the UAE Designer Exhibition, showcasing work by 20 local artists and designers.

In this context, Benton's installation presents a direct provocation, taking stories from the fringes of UAE society and placing them at the heart of one of the biggest cultural events of the year. 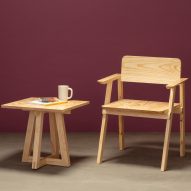 "With Covid-19 travel restrictions, we are all being forced to look at what's directly around us and that's a good thing. I hope I'm not being controversial by saying the last thing we need is another design fair full of collectable, high-end furniture designed by a starchitect," he explained.

"For many viewers, it has been a big shock to see luxurious, seductively-designed objects situated next to a collection of recycled chairs made by everyday people. But that juxtaposition also works to flatten hierarchies between our idea of an artist, designer or craftsperson, which are of course loaded terms."

To Benton, the installation also presents a vision for how we can develop more sustainable production and consumption practices, without defaulting to a white, Western point of view.

"In the countries of the Indian subcontinent, there's a concept called jugaad, which basically is about hacking things to make them work using whatever's at hand," he said.

"The researcher Deepa Butoliya has coined the term 'critical jugaad' to talk about how these DIY, hacked designs are one of the only available forms of resistance and subversion to consumer culture and mainstream design typologies. I like this idea because it situates design solutions around the Global South and gives us a framework for a possible way out."

Indian designer Sachi Tungare recently applied the principle of jugaad to a series of swirly vessels, made entirely from discarded cigarette butts, while Jorge Diego Etienne used building material offcuts from affordable housing projects in Latin America to form the furniture in his Tempo collection.

Dubai Design Week 2020 is taking place in the Dubai Design District from 9 to 14 November. For details of more architecture and design events, visit Dezeen Events Guide.