Set to be built in the suburb of Riviera, the library will pay homage to the country's second post-apartheid president, Thabo Mbeki, and celebrate ancient and contemporary African history.

Among its facilities will be a research centre and museum, which Adjaye Associates hopes will establish it as an "anchor point" for local and international scholars.

"The Thabo Mbeki Centre presents an opportunity to realise the ambition of the dreams of President Thabo Mbeki to advance and empower an African renaissance," said the studio's founder, David Adjaye.

"The architecture of the library taps into the collective memory of the continent through the establishment of a new historical centre for African consciousness in which knowledge, education and sustenance are nurtured in the representation and intelligence of the continent."

Once complete, the 5,400-square-metre Thabo Mbeki Presidential Library will comprise two levels – one of which will be concealed below ground.

The upper level will be housed within the rammed-earth domes that are designed by Adjaye Associates to evoke a collection of traditional African granaries – a type of storehouse for grains.

Alongside the research centre and museum, the building will contain seminar rooms, a reading room, an auditorium and temporary exhibition spaces.

There will also be a cafe and shop, an area dedicated to the empowerment of women and archival spaces for the storage of artefacts belonging to historical African figures, including Mbeki. 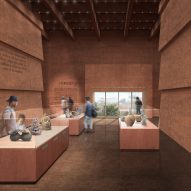 The mud that will be used to build the rammed earth structures will all be sourced locally in an attempt to help reduce the library's embodied carbon footprint. Similarly, portions of timber cladding will be harvested from native wood species while terrazzo flooring throughout the building is to be crafted from local stone.

To minimise the building carbon emissions when in use, Adjaye Associates plans for the library to utilise rooftop photo-voltaic solar panels to generate electricity.

A geothermal heating system is also planned, and it will work in tandem with the thermal mass of the rammed earth walls to regulate the building's temperature.

Interior details for the Thabo Mbeki Presidential Library are yet to be disclosed, though the visuals suggest the rammed earth will be exposed internally and teamed with minimal, dark wood furniture.

Each domed structure will be punctured by a unique geometric aperture at roof level, intended to create different lighting conditions and "a distinct atmosphere for each of the programs".

The domes will be connected internally by a corridor that will extend the length of the entire building, and linked to the subterranean level via a large spiral staircase on one side.

The internal corridor will be reflected externally by a large terrace that envelops the library, intended to be utilised as a public space for the community.

Adjaye Associates was founded by British-Ghanian architect Adjaye in 2000, who was the recently named the recipient of the RIBA Gold Medal for 2021. To celebrate the news, we rounded up 10 of his and his studio's most significant projects.

Elsewhere, Adjaye Associates recently revealed its proposal for the Edo Museum of West African Art in Nigeria and the Le Mémorial des Martyrs in Niger that will be a composed of a grid of 56 concrete, four-pointed-star-shaped columns.