A new double-volume anthology presents 100 of the most collectible cars from across history. In a Dezeen exclusive, authors Charlotte and Peter Fiell pick out seven cars that top the list, including a Mercedes Benz thought to be the most valuable car in the world.

Published by Taschen, Ultimate Collector Cars showcases some of the most innovative examples of automotive design ever produced, in exquisite detail.

"It's 100 of the rarest, most desirable, most extraordinary and most collectible cars of all time," said Peter Fiell. "The total value of the cars in the book is over $1.2 billion."

"At the cutting edge of technical possibilities"

The cars featured were chosen for their rarity and exclusivity – the majority were either used as racing cars, or "homologated" from racing cars – meaning they were produced as part of the regulation process for motorsport sanctioning bodies.

In both cases, only a limited number would have been produced. 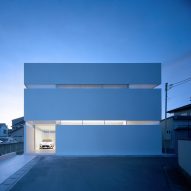 Eight houses designed to show off their owners' car collections

"These weren't people cars; these were cars at the absolute cutting edge of technical possibilities," said Charlotte Fiell. "Every single car in the book was pioneering in its day."

Shedding light on the secretive world of car collecting

In most cases, the car showcased in the book is the ultimate example of its type in known existence.

However, the authors point out that the locations of many historic cars are unknown, because sales are often kept behind closed doors, and many private collectors keep the contents of their collections a secret.

"We hope to shed new light onto this whole world of car collecting," said Peter Fiell. "We really wanted to share the beauty and stories of these wonderful vehicles with a wider audience," added Charlotte Fiell.

Read on for Charlotte and Peter Fiell's pick of the seven ultimate collector cars:

For Italian automotive company Alfa Romeo, 1938 was a key season because it marked the company's return to motor racing, after several years of disbandment, and the launch of the Alfa Corse team. It was also the last year when Ferrari headed the in-house works team.

The Alfa Romeo 8C 2900B MM Spider was the racing car designed for this season, with five produced for the Mille Miglia event.

"It is generally considered the most collectible pre-war sports racing car of all time," said Peter.

This particular example is the car that was driven by race winner, Clemente Biondetti. It is owned by the Simeone Foundation Automotive Museum in Philadelphia.

The fastest road car of its day, the Uhlenhaut Coupé was designed by Rudolf Uhlenhaut as a coupé version of the 300 SLR race car, which Stirling Moss drove to victory in the 1955 Mille Miglia.

The car was developed for the track, but never competed because – following the Le Mans disaster that year, which involved the 300 SLR race car – Mercedes Benz withdrew from racing for the rest of that season. As a result, only two examples of the coupé were ever produced.

Both owned by the Mercedes-Benz Museum, these collector cars are distinctive for their "gullwing" doors, which open upward and outward.

"This is not only one of the most gorgeous Ferraris is of all time, it's also one of the rarest," said Peter, describing the 290 MM.

Only four of these cars were ever built. This particular example is the one that Argentinian driver Juan Manuel Fangio raced in the 1956 Mille Miglia, where the Scuderia Ferrari racing team enjoyed a 1-2-3-4 finish. However, this car placed fourth, when it was expected to win.

"Fangio, who may be considered the greatest racing driver that ever lived, didn't fulfil his promise and probably felt he was letting Enzo Ferrari down," said Peter.

Luckily for Fangio, he and the 290 MM went on to win the World Sportscar Championship later that year.

With its low-slung aerodynamic form, the Ferrari 250 Testa Rossa was a controversial car. However, this lightweight body was key to the car's competitiveness – not only did it reduce drag, but it also directed air to vents that cooled the brakes.

It retained the excellent handling and reliability of the very first Testa Rossa, built the year before, but was equipped with a more powerful V12 engine.

There were 34 of these cars produced. This particular example was the winner of the 1,000 Kilometres of Buenos Aires event in 1958, but is also distinctive for another reason.

"It's a competition-winning Testa Rossa, but also it's the only black one," revealed Peter. "All the Ferraris are red, so it was particularly desirable to get this car in the book because it's unusual in its colour."

Carroll Shelby had originally planned to race his 427 Cobra in the 1965 season, but as production was slow, he failed to meet the homologation rules that required 100 cars to be built.

Production was halted as a result, and 29 of the unused competition chassis were repurposed to create the 427 Cobra S/C (semi-competition). These street racers retained many of the race car features, including the riveted hood scoop, oil cooler, roll bar and side exhausts.

"If I could have any car in the book, I think it would be this one," said Peter.

"It's one of the most powerful, dangerous, visceral, road cars you can ever imagine. If you heard this thing, you wouldn't believe it. It's a beast."

This example is one of the few that still remain in good condition; according to the authors, most have been "hammered into the ground" by their owners.

The Miura P400 made headlines when it was first launched in 1965, as a result of its transversely mid-mounted 60° V12 engine, which was a huge innovation at that time. It later was given a curvaceous body, designed by Carrozzeria Bertone.

"There are a lot of people that think the Lamborghini Miura is the most beautiful supercar ever designed," said Peter.

The model proved so successful that engineer Bob Wallace was able to convince company founder Ferruccio Lamborghini – who was famously reluctant to produce race cars – to develop a competition version of the car, the SV.

Although the car never made it to the track, it attracted the attention Mohammad Reza Pahlavi, the Shah of Iran and an avid car collector. Lamborghini built Pahlavi a modified version, known as the SVJ, which provided better performance and had a racier appearance. Another three were also produced, but this one remains the most collectible.

"You can say without a shadow of a doubt that this is the ultimate Miura," said Peter.

A true supercar, the McLaren F1 sports car combines high-tech materials like carbon fibre and titanium with a central driving position ahead of the engine and fuel tank, and distinctive butterfly doors.

"The McLaren F1 is still considered today to be one of the most important automotive designs in history, because of what it represented," said Peter. "It set all sorts of precedents in terms of its design and engineering."

After a race version of the F1 took four of the top five places at Le Mans in 1995, McLaren developed the LM variant, a road car that more closely resembled the track car than the original F1, thanks to race engines and weight-reduced interiors.

Only five of these F1 LMs were created, along with a single prototype known as the XP1 LM, which is the example featured here. It features a "papaya orange" finish, in tribute to Bruce McLaren's original racing colours.