Titled Three British Mosques, the Applied Arts Pavilion was created by Saleem alongside curators Ella Kilgallon and Christopher Turner as a part of an ongoing collaboration between the Victoria and Albert Museum and the Venice Architecture Biennale.

The pavilion aims to celebrate Islam and the South Asian diaspora in London by portraying the evolution and adaptation of mosques and local buildings.

It depicts three 1:1 scale case studies of mosques across London. Featured are the Brick Lane Mosque, located in a building that has housed both a church and a synagogue, an Old Kent Road mosque set in a former pub, and a mosque in converted terraced homes in Harrow Central.

"Islam is a highly portable religion and in Britain, any group can start a mosque, without appeal or approval from a higher religious authority," said the Victoria and Albert Museum.

"Most mosques in Britain are grass-roots, crowd-sourced, community projects that exemplify creative reuse," the curators said.

"As new-build mosques replace these ad-hoc structures, this form of community-led design is being lost. The V&A’s pavilion is an attempt to record and celebrate this stage of mosque-making in Britain."

The fragments of each place of worship centre around the mosque's mihrab, a semicircular niche that orients the direction of prayer. The exhibition aims to illustrate the differences in architectural styles and religious expression.

"Each case study illustrates a different moment in the evolution of the British mosque," explained the curators.

The Brick Lane Mosque, which was adapted by Bangladeshi Muslims, is swathed in marble panelling and includes a large Doric column.

Carpet leads visitors to a reconstruction of a sundial that tops the Georgian building in east London.

The replica of the Old Kent Road mosque is a reconstruction of a mosque located in a former pub that was converted by a Nigerian community.

Golden embellishments and Quranic calligraphy cover the walls and windows, and a blue carpet with trefoil arched shapes stretches beneath the full-scale model. 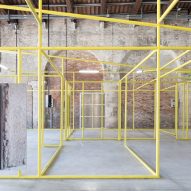 The Harrow mosque, a pair of semi-detached homes converted by the Pakistani community, asserts its residential ties through letterboxes, house numbers, door knockers and welcome mats at its entrance.

Alongside the 1:1 reconstructions 3D scans, drawings and films produced in collaboration with the communities display the use and scale of the spaces.

There are approximately 1,800 mosques across the UK, fewer than 20 per cent of which are purpose-built.

The first mosque was established in 1889 in a converted terraced home in Liverpool. That year, the first purpose-built mosque was also commissioned in Surrey.

With the religious buildings deeply rooted in the cultural identity and social fabric of British cities, the curators hope that the installation will highlight mosques' importance on the British urban environment.

"We hope the 1:1 reconstructions give visitors a sense of the emotional experience of these mosques," they said.

"Ninety per cent of Britons have never visited a mosque and we hope this encourages more to cross the threshold."

Elsewhere at the biennale, Superflux has imagined a multi-species banquet, while Helen & Hard has built a 1:1 cross-section of a co-housing project make using spruce.

Photography is by Andrea Avezzu.

Three British Mosques will be on display at Sale d'Armi, Arsenale as part of the Venice Architecture Biennale, which takes place from 22 May to 21 November 2021. See Dezeen Events Guide for all the latest information you need to know to attend the event, as well as a list of other architecture and design events taking place around the world.