Traditional craft materials can be reinvented with digital technologies according to Kuma Lab co-director Toshiki Hirano, who has created a London Design Biennale installation exploring a new use for Japanese paper.

As Japan's contribution to the London Design Biennale, the Reinventing Textures installation combines traditional washi paper with photogrammetry and digital projection mapping, to explore the objects, sounds and surfaces on the streets of London and Tokyo.

Hirano presents this project as an example of how architectural materials can be used in new ways when combined with digital scanning and fabrication tools.

"I see huge potential in combining the traditional with the digital, to come up with new kinds of aesthetics and designs in architecture," the Japanese architect told Dezeen.

Although Hirano worked on this project solo, rather than as part of the Kuma Lab, it offers an insight into the type of work that he and co-director Seng Kuan have been exploring since taking over the lab from its founding director, Kengo Kuma, when he retired from the role last year.

Officially known as the Sekisui House Kuma Lab, this experimental facility at the University of Tokyo aims to push the boundaries of architecture and materials.

"We're setting up new fabrication facilities inside the university, which allows us to investigate this research topic in more depth and a larger scale," Hirano said.

Reinventing Textures saw Hirano take to the streets of Tokyo with a 3D scanner, capturing the objects and textures he found – from public transport to takeaway food – while a group of students from the Royal College of Art did the same in London.

Hirano then combined this 3D information into a papier-mâché wall relief, and overlaid the digital information on top using digital projection mapping, as way of combining the "urban textures" of these two cities.

This installation is completed by a "sound collage" produced by MSCTY Studio in Tokyo, using various field recordings.

Hirano doesn't see this installation as something that would be directly recreated in architecture, but he said it could offer a starting point for how complex data can be used in the design of buildings.

"I like this idea of an aesthetics of a vast amount of information," he said.

"For this installation, I had to handle a 3D scan model which had thousands of meshes, which you wouldn't usually handle in the conventional architecture design process. Maybe this could push the boundary of architecture in some way."

In the past, the Kuma Lab has worked with a range of both new and traditional materials.

In 2019 – while Kuma was still in charge, and Hirano was the lab's assistant professor – they produced Bamboo Ring for the London Design Festival, which showed how bamboo and carbon fibre can be woven together to create strong, self-supporting structures. 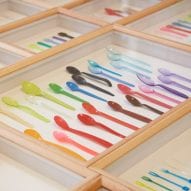 Hirano has also worked on various material explorations of his own, for instance, his Ontology of Holes installation played with synthetic materials including fake fur and artificial rocks painted metallic silver.

The architect believes says that washi paper is a material he would like to further experiment with in the future.

"What I think is really interesting about working with Japanese paper is that, when used to recreate the highly complex form of 3D-scanned model, the intricate form actually adds structural strength," he explained.

Reinventing Textures is on display at Somerset House as part of the London Design Biennale, which takes place from 1 to 27 June 2021. See Dezeen Events Guide for all the latest information you need to know to attend the event, as well as a list of other architecture and design events taking place around the world.