American architect David Rockwell has designed the sets for an outdoor theatre series in New York composed of short plays based on the seven deadly sins and performed in empty shop windows.

Called Seven Deadly Sins, the seven 10-minute-long plays are each by a different playwright. All but one of the plays takes place in a series of empty shopfront windows in Manhattan's Meatpacking District.

"As an architect and New Yorker, the pandemic has made it clear that the city without people feels like an empty theatre," Rockwell told Dezeen.

"A production such as The Seven Deadly Sins that takes place right on the street creates that kind of interactive frisson that makes New York one of the greatest cities in the world," he added.

"It celebrates that spirit of gathering outside and transforms the streets into a playhouse."

Envy is the only production performed in a shipping container, while the rest of the plays take place in shopfronts close together between West 13th Street and Gansevoort Street. Rockwell did not design the set for Greed.

Designed in individual distinctive colours, each play's set features a bright graphic sign spelling out the word of the sin it represents.

The seven deadly sins, also known as cardinal sins, refer to seven universal sins that are traditionally considered to be immoral in Christian teaching. They are pride, greed, wrath, envy, lust, gluttony and sloth – the names of each of the plays.

Audiences begin their experience at a loading dock near the Whitney Museum which acts as Purgatory, a biblical concept for the place that sinners go to when awaiting their fate after death. Neon lights and a red Mylar curtain that doubles as a ticket window decorate the space.

The sets and storylines of each short play vary dramatically. Lust presents its audience with a vivid neon purple scene with a pole placed in the middle of the set, on which a pole dancer performs a monologue. 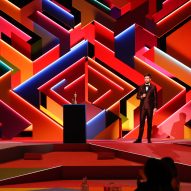 "The experience is highly choreographed," explained Rockwell. "Audiences move from storefront to storefront in groups, seeing all seven plays in an hour and 45 minutes."

Pride delves into the story of a transgender blogger who is wrestling with a large corporation having begun to craft the content he publishes, leading to his readers feeling betrayed by him.

The play takes place against a backdrop of trans flags, a rainbow curtain made of Mylar and Pride-themed bunting.

"Each play has its own unique story to tell," said Rockwell.

"We developed a concept for each show then explored the design in renderings before laying out ground plans that accounted for the various audience sightlines, one of our main challenges."

New York City Department of Transportation worked with the pair to make the productions possible.

Rockwell reflected on what he hopes audiences will take away from the plays, which are showing in Manhattan until 25 July.

"The playwrights have tackled the subject matter in incredibly compelling and divergent ways, so I expect audiences will be hugely entertained and provoked, in the best possible sense, by the work," he said.

"Sin is a topic about which everyone can relate, and this is a very full theatrical meal with something for everyone."

"On a deeper level, I hope that this gives audiences a chance to flex our collective empathy muscles, which may have atrophied a bit during a year of isolation," concluded the architect.

David Rockwell is an American architect and designer who founded the Rockwell Group in 1984. He recently designed the set for this year's Oscars ceremony in Los Angeles.

The photography is courtesy of David Rockwell.

Seven Deadly Sins is on show in the Meatpacking District in New York until 25 July 2021. See Dezeen Events Guide for an up-to-date list of architecture and design events taking place around the world.