The Al Thumama Stadium in Doha designed by Qatari architect Ibrahim M Jaidah and based on a gahfiya cap has been inaugurated ahead of the FIFA 2022 World Cup.

The 40,000-capacity stadium in the south of Doha is the sixth tournament-ready venue to be completed ahead of the World Cup, which is scheduled to take place in Qatar next year.

Named Al Thumama Stadium after a locally found tree, the stadium has a distinctive circular form.

It was designed by Jaidah, who is the chief architect of Arab Engineering Bureau, to look like a gahfiya, a traditional woven head cap worn by men throughout the Middle East.

"I remember that night, I got my hands on all types of gahfiyas in order to study the different patterns on each," said Jaidah.

"I've always worn it as a child, however, I didn't expect to see all the different shapes and the depth of their designs."

"I used to wake up in the middle of the night to examine the patterns on the different gahfiyas," Jaidah continued.

"I finally drew a rough sketch that I liked and told my engineers that this will be the design we are going with."

Jaidah and his studio Arab Engineering Bureau were one of several organisations invited by Qatar's Supreme Committee for Delivery & Legacy to design a stadium informed by a gahfiya for the site.

He hopes that his design will reflect both the modern and traditional nature of the country.

"I had a feeling my competitors were going to take the original shape and completely modernise it; removing its traditional essence and making it look nothing like a gahfiya," said Jaidah.

"I wanted to ensure my design was modern but at the same time, I didn't want to strip it from its traditional identity. Preserving local identity and heritage was of paramount importance to me."

The circular stadium has a concrete bowl that will have 40,000 seats during the World Cup.

Above and around, the head-cap-shaped canopy will provide shade for spectators and players as part of the stadium's cooling strategy.

"The shape of the gahfiya does not only serve a design purpose," said Jaidah.

"In a similar way to how the gahfiya is used to cover one's head from the heat, the shape is also used to protect the spectators from the sun."

Like many of the venues at the World Cup, which will be played in November and December, Al Thumama Stadium will be artificially cooled.

At this stadium, air is cooled using fans powered by solar energy and then released into the venue through large pitch-side nozzles and grills in the stands. 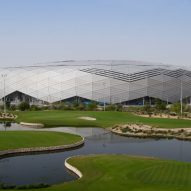 Following the World Cup, the stadium's capacity will be reduced, with 20,000 seats from the upper stands removed.

In their place, a boutique hotel will be built with 60 rooms directly facing the pitch.