Eames Demetrios, who is the grandson of Charles and Ray Eames, shares his highlights from an exhibition of Eames Office's work that opens tomorrow to mark its 80th anniversary.

Demetrios curated the exhibition of work created by the studio, which was established by industrial designers Charles and Ray Eames in 1941, where he is currently director.

The Eameses were two of the 20th century's most influential designers, known for notable American architecture and furniture including the mid-20th century Case Study House #8 and their 1956 Eames Lounge Chair and Ottoman. 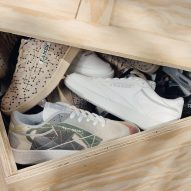 Named 80 Years of Design, the exhibition at Tokyo gallery Istetan the Space contains a selection of rarely-seen vintage works and special editions created for the show.

80 Years of Design will be split into three parts – Art and Technology, Architecture and Interiors and Play and Learn – that chart the Eames' cultural contributions to these various aspects of society.

Ahead of the exhibition's opening tomorrow, Demetrios has selected five of his highlights for Dezeen:

"The 1951 Eames Modular House was designed by Charles and Ray as a structure which could be simply prefabricated and relatively quickly assembled. Both a sponsor and site (not far from their home) were secured for Modular House #1, but the project was ultimately left unrealised.

"70 years later, we have spent over a year sifting through original materials to capture the design in a new architectural model at a 1:12 scale. The 1951 Eames Modular House model has all of the delights of any well-made miniature.

"We used skilled craftsmen to create the structure and furnished it with unique pieces crafted at scale. It's been a wonderful way for us to peer into the past to better understand Charles and Ray's goals to hopefully be able to bring it to life one day."

"In the family, we've always loved this amazing piece. So, following extensive research and working with the leading craftspeople, we've made a limited edition of the 1943 Molded Plywood Sculpture by Charles and Ray – limited to 12. The development of the sculpture not only marked a pivotal point in Charles and Ray's career but 20th-century design overall.

"It signifies a moment in time that the two began innovating together. As newlyweds, new to LA, and new to working together, this sculpture and the ability to create it together was kind of the culmination of Charles and Ray figuring out how to truly work and create, harnessing a shared vision."

"Another fantastic element of the exhibition is that our two longest-standing partners have created special editions of some of the pieces we've produced through them for many years.

"For Herman Miller, standouts are the 1956 Eames Lounge Chair and Ottoman in Natural Leather and the 1960 Time-Life stool, originally designed for the Time-Life building in New York and typically crafted in solid walnut, available in exclusive red-stained ash.

"For Vitra, highlights see the 1941 Eames Plywood Mobile, one of the biomorphic shapes created during their early plywood experimentation, available in natural birch veneer, alongside the iconic and playful 1945 Eames Elephant."

"Another favourite aspect of the exhibition is an eight-by-24-foot timeline of 80 years of the Eames Office.

"This was a real labor of love and opportunity to reflect upon the work that Charles and Ray did but also, the work that we've been doing to ensure that their creations are being made authentically and their ideas widely shared. It was the first time we put it all together in one place and was quite emotional for the family."

"The Eames Eucalyptus Skateboard Decks have all sorts of surprising resonance. Firstly, they are made from beautiful wood that Charles and Ray literally touched for over 30 or 40 years, as they were born from a eucalyptus tree ('Molly'/#236) at the Eames House in Pacific Palisades.

"'Molly' lived right next to the studio and had to be removed (with the help of local sustainable lumber company Angel City Lumber) as the roots were uplifting the walkway to the house – thus posing a threat to the structure.

"An interesting fact and connection is that the planting of the eucalyptus trees was put into motion by Abbott Kinney who founded Venice, California, in the 1800s – a place that is known for skateboarding culture. For the 80 Years of Design exhibition, we even included a film clip that Charles and Ray made of skateboarding in Dogtown."

80 Years of Design is on show at Isetan the Space in Tokyo from 5 November to 5 January 2022. See Dezeen Events Guide for an up-to-date list of architecture and design events taking place around the world.