The concert hall at the iconic Sydney Opera House in Australia has reopened following the long-awaited renovation of its dated acoustics, functionality and accessibility.

Carried out by a team led by Australian studio ARM Architecture and engineering firm Arup, the revamp was the final stage of a wider overhaul of the entire building.

The project was carried out in time for the building's 50th anniversary in 2023.

"In 2012 Louise Herron, Sydney Opera House CEO, announced that the Sydney Opera House would undertake a 'decade of renewal'," said ARM Architecture principal Andrew Hayne. "The concert hall was the last and biggest of a series of projects," he told Dezeen.

Defined by its vaulted tile-clad shells, it is regarded as one of the most iconic buildings of the 20th century.

ARM Architecture was appointed as an architect and lead consultant for the renewal of its concert hall in 2015.

ARM Architecture's proposal for the revamp focused on the concert hall's acoustics and accessibility issues, which principal Hayne said had "plagued" the building.

"At nearly 50 years old, the concert hall was faced with end-of-life theatre machinery above the ceiling, a poor reputation for acoustics and mobility issues that plagued the whole of the building with significant spaces only accessible by imposing staircases," Hayne explained.

"We were appointed in mid-2015 and have spent the past seven years carefully working with the SOH and the consultant team to ensure the right design solutions to improve the acoustics, functionality and accessibility were implemented into this iconic building."

To improve the concert hall's acoustics, the team replaced the original hanging reflectors with 18 petal-shaped fibreglass versions that enhance acoustics for both performers and the audience. Magenta in colour, these also nod to the venue's original seating designed by Hall.

The petals work in tandem with various other new acoustic detailing, such as a series of operable wall reflectors and carved timber panels that envelop the stage and stalls.

Hayne said these measures were vital due to the venue's tall ceiling height and the fact it is "at least one-third longer than what an ideal concert hall should be", leading to poor acoustics.

"These two factors meant that acoustic energy from the orchestra was getting lost in the upper reaches of the ceiling and would also not make its way to the very back of the hall," Hayne explained.

"The acoustic enhancements also bring an equity to the listening experience for those attending shows," he continued. "[It is] no longer a room with a differing acoustic depending on where you sat, there is a consistency and vibrancy to all seats in the house."

As part of its overhaul, ARM Architecture also introduced modern theatre machinery that will enable more diverse and ambitious performances in the hall and speed up changeover times, while backstage and rehearsal areas have been enhanced.

The main stage has been lowered to improve sightlines and fitted with automated stage risers that allow a tiered layout to be quickly set up for orchestral performances.

Finally, circulation has been improved by a new passageway through the eastern foyer and lifts that connect all levels of the northern foyer, the circle and the upper circle.

The new lifts allow wheelchair users to access these spaces for the first time. According to Hayne, this was particularly important in the northern foyer, as the area looks out over Sydney Harbour.

"This brings equity in access to what is one of the most picturesque spots in the Sydney Opera House with a fantastic view out over the harbour," he explained. 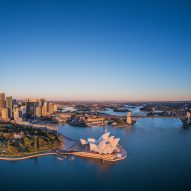 The studio also worked closely with Design 5 and the opera house's own Design Advisory Panel (DAP) who peer-reviewed all of the designs to ensure suitability.

"We dove deep into the history of the place, getting to know and understand Utzon's original design approach, but also importantly, the work of Peter Hall who took over once Utzon left and has been unfairly maligned over the years," reflected Hayne.

"It was primarily his work that we were interacting with and so understanding the background and design intent of his elements was critical to the success of the new interventions we have made."

Another iconic 20th-century building undergoing major renovations is the Centre Pompidou in Paris, France, by Renzo Piano and Richard Rogers.

In 2023 it will close for four years while ageing components including its heating and cooling system, escalators and elevators are repaired and replaced.

The photography is by Daniel Boud unless stated otherwise.