Design duo Eneris Collective has collaborated with Barcelona-based biomaterials company NaifactoryLAB to produce a playful stool for children made from waste olive pits.

The Nontalo stool is constructed from six modules – three P-shaped pieces that can be combined and positioned in different ways and three straight rods that hold them together, forming a variety of shapes from a three-legged stool to a bench seat and many alternatives in between.

All of the modules are made entirely of Reolivar, a smooth cork-like material that NaifactoryLAB created by mixing olive pits with bio-based binders and other natural ingredients.

Spanish designers Irene Segarra and Irene Martínez, who came together under the name Eneris Collective for this project, describe Nontalo as a seating design "where play, spontaneity and sustainability are in harmony".

The duo created the stool after NaifactoryLAB invited them to experiment with Reolivar and develop new applications for the biocomposite.

"For four months, we worked with this new material," Martínez told Dezeen. "We got to know the possibilities it has, the pros and cons, and what its limits are."

"The idea was to generate a structure that doesn't have the obvious shape of a stool with a seat and legs, but maintains the same function," she continued.

The designers began by deciding on a series of words and concepts to define their intention of the project before sketching proposals and interweaving these different ideas.

"Our inspiration throughout this design stage was children's construction sets," said Martínez.

The duo initially created a right-angled design for the P-shaped modules but ended up turning the legs out by five degrees after realising it created better weight distribution as well as bringing a sense of harmony. 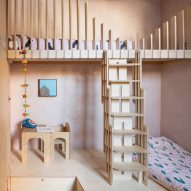 To lock the pieces together, users simply have to slot the straight rods through their central opening.

Eneris Collective shaped the Reolivar pieces in custom moulds, which Martínez says has the benefit of limiting waste as there are no offcuts.

The material can be composted at the end of its life or returned to NaifactoryLAB for recycling. The stool's mono-material design makes this particularly straightforward, as there are no other materials or components to separate.

Over the course of its life, the material will age according to its environmental conditions and will last longer in dry, indoor environments away from humidity and rain, according to NaifactoryLAB.

The biomaterials company first developed Reolivar in 2020 using a bunch of olive pits grabbed from a dish at the end of a meal. Since then, it has been turned into a range of products including lamps, bowls, mirrors and trophies.

Eneris Collective is now working to develop a wider Nontalo Kids seating collection, building on the same shapes and ideas.

A number of other designers are experimenting with biomaterials in an attempt to produce more sustainable furniture. Some recent examples include mycelium lampshades from Estonian company Myceen and a stool and side table by Carolina Härdh, made from food waste for Gothenburg restaurant Vrå.

The photography is by Valentina Masallera and Caetano Portal.