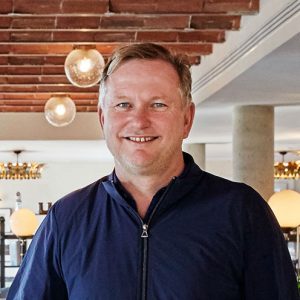 Nick Jones is the founder and CEO of Soho House.

Jones began his career as a graduate trainee at Trusthouse Forte and soon became the marketing manager at Grosvenor House Hotel on Park Lane. Eight years later, he launched a trio of restaurants called Over the Top, and in 1992, opened Cafe Boheme in Soho, London.

Nick opened Soho House, a private members’ club for people in the creative industries, in 1995, after buying the Georgian townhouse above Cafe Boheme. The group has gradually expanded ever since, and now includes 18 members clubs, as well as workspaces, restaurants, spas, cinemas and hotels around the world.

Every Soho House space is designed with the intention to create a comfortable home-from-home atmosphere for a community of like-minded people. Nick is involved in the design of all new projects, taking inspiration from the buildings’ character and history.

Soho House was named one of the 300 most newsworthy forces in the design world in the 2017 Dezeen Hotlist.