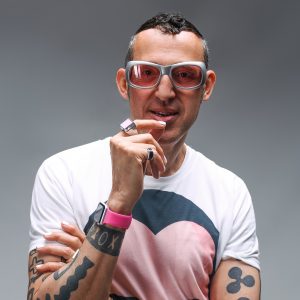 Karim Rashid is a unique and prolific designer of our time, with over 4000 designs in production, over 300 awards to his name, and clients in over 40 different countries.

His designs range from luxury goods to furniture to packaging, for clients such as Christofle, Paul Mitchell, Bonaldo, Artemide, Asus, Marburg, Hugo Boss and Kenzo, to name just a few.

Rashid’s influence expands beyond product to interiors for a range of functions, including Switch in UAE, Park Inn by Radisson Amsterdam City West, Temptation Resort Cancun, Universita Metro Station in Naples, Paraiso Bayviews in Miami, Fun Factory in Berlin and Munich, and concept exhibitions for clients such as Dupont Corian, Deutsche Bank, PepsiCo, and Audi.

Some of the 300+ awards he has won include the Red Dot award, Chicago Athenaeum Good Design award, Pentawards, and IDSA Industrial Design Excellence award. He holds Honorary Doctorates from Carlton University, Pratt Institute, OCAD in Toronto, British Institute of Interior Design, and Corcoran College of Art & Design, and has lectured at universities and conferences globally.

Karim creates digital prints, public art/ installations and sculptures that are featured in 20 permanent collections in various art institutions worldwide, including Brooklyn Museum of Art, MoMA, and The Center Pompidou. He has exhibited internationally and is a frequent contributor to the Venice Biennale. He has also had major retrospectives of his design work in Sao Paulo, Seoul, Milan, and Ottawa.

Karim himself has featured in countless print and digital platforms such as CNN, Vogue, Elle, GQ, and The New York Times, and has published many monographs of his work.
Karim established his studio in New York City in 1992, and expanded his global reach with a studio in Shenzhen, China in 2014.