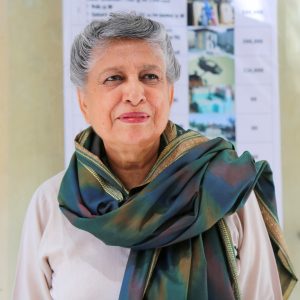 Yasmeen Lari, the first female architect in Pakistan, is an architectural historian, heritage and environmental conservationist, humanitarian worker and philanthropist.

Lari graduated from Oxford Brookes University and was elected to Royal Institute of British Architects in 1969. She served as president of Institute of Architects Pakistan (1980-1983), and as first chairperson of the regulatory Pakistan Council of Architects and Town Planners (1983-1986).

After building several landmark buildings and social housing, and the largest urban redevelopment project in Asia at the time, she retired from architectural practice in 2000. As CEO and co-founder of Heritage Foundation of Pakistan since 1980, she has helped conserve several historic monuments in World Heritage Sites and landmark buildings in various cities. She has served as UNESCO National Advisor and was included among 60 Women who have contributed the most towards UNESCO’s objectives.

Since the 2005 earthquake, she has developed a number of methodologies for low-cost affordable housing which are climate resilient and provide social and ecological justice to those at the bottom of the pyramid (BOP). By building over 40,000 one-room houses in disaster-affected areas, she has helped place Pakistan in the lead with the largest zero carbon shelter programme in the World.

She is the recipient of many national and international awards including Sitara-i-Imtiaz (2006) and Hilal-e-Imtiaz (2014) conferred by the President of Pakistan; the Asia-focused Fukuoka Prize for Asian Arts and Culture (2016) in Japan; and the international Jane Drew Prize (2020) in London. She has also received the Islamic Development Bank Prize for Women’s Empowerment (2013), and World Habitat Award (2018). Addressed as "Architect for the Poorest of the Poor", when conferred an honorary degree Laurea Magistrale ad honorem (2021) by the prestigious Politecnico di Milano in Italy, becoming the first woman recipient in 158 years.

She has authored and co-authored several books and publications including The Dual City (1996), and Traditional Architecture of Thatta (1989), among others. She has lectured widely in universities and architectural institutions in Asia, Europe, Australia and US. Her architectural works have been exhibited in various countries around the world including the Chicago Architecture Biennial, Chicago (2015), the Vienna Biennale, Vienna (2019) and the Museum of Modern Art, New York (2022).