Chiarano Primary School was designed by C+S Architects to accommodate 250 students in ten classrooms with glazed walls that allow light to permeate throughout the interior.

Interior spaces are arranged around a large entrance hall featuring a double-height atrium containing a glazed box that intersects the main building. 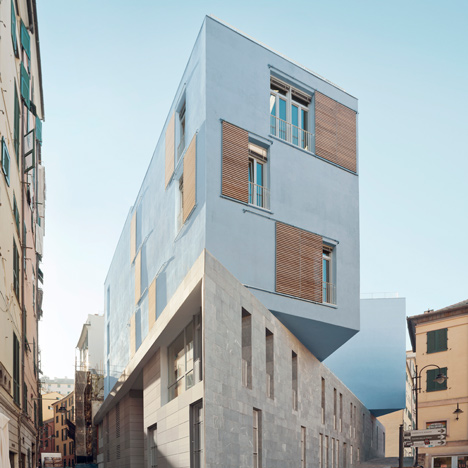 Windows along all sides of the central structure allow natural light to flood the entrance foyer and provide views of a garden used for teaching that is constructed within the glazed walls of the inner cube.

The garden is raised on columns to ensure views across the ground floor are maintained and the glass walls permit views between the floors and from one side of the first floor balcony to the other.

"The building is porous," said the architects. "It allows the territory and the light to flow inside the spaces."

Light tubes with transparent domed caps embedded in the structure supporting the garden reflect light downwards into a library underneath.

The library is positioned at the heart of the building and is intended to be a publicly accessible space, open to the rest of the community after the pupils have left.

"School buildings are in fact the places where a multi-ethnic and multi-cultural experience happens naturally through the children," said the architects. "This is why we have started to enhance the more public spaces in order to open them up to the whole community after the school hours."

Circulation areas around the edges of the foyer and a balcony on the first floor negate the need for enclosed corridors which would obstruct sight lines across the space.

The southwest facade of the two-story building is fully glazed and provides views of the surrounding countryside from the classrooms within.

Walls separating the classrooms from the public spaces feature glazing between the ceilings and horizontal plywood storage units that reach a height of 120 centimetres.

The glass sections offer a visual connection to the rest of the building, while the shelving can be used to store pupils' belongings and block views when seated that could distract them when working.

As a manifestation of the architects' belief that schools can provide "punctual coloured events in the grey urban sprawl", one of the building's facades is painted red and features geometric shapes in contrasting colours around the window openings.

Here's some information from C+S Architects:

The building is porous. It allows the territory and the light to flow inside the spaces.

A glazed facade, facing the South-West side, opens the view on the surrounding countryside. The walls which separate the classrooms from the corridors are opaque only for the first 120cm and glazed on the upper parts. This condition enhances the intervisibility from the outside space and among the inner spaces.

No corridors are used for the school layout as all the classrooms’ access happens on the main entrance hall on the ground level and thanks to a suspended balcony on the first floor. This solution maximises the visibility among the spaces.

The intervisibility is also emphasised by the visual connections between the different levels, thanks to the double hight designed for the main entrance and to the design of a glazed 'lantern of light' that is suspended over the library, which gives character to the school entrance hall. The suspended lantern houses a 'botanic garden' for outdoor experimentations.

The library is the core of the project, and it has been thought as a new urban node for the community, since it is kept open after the school hours.

The community has been involved in the project with a special theatre play, in which architects, working with the children of Chiarano's primary schools, a drama teacher and a musician interacted together to shape the design and the construction of the future school. No didactic purpose was that assigned to the theatre project, but the idea of introducing the new construction to the community through a strong shared and enjoyable experience.