News: the V&A Museum will collaborate with developer China Merchants Group on content for the Shekou Museum in Shenzhen designed by Tokyo architect Fumihiko Maki.

The Japanese architect, who was awarded the Pritzker Prize in 1993, unveiled models of the museum to coincide with the formal signing of an agreement between the V&A and the Chinese development company.

The developers and the V&A claim it will be China's first major design institution, pipping to the post the Herzog & de Meuron-designed M+ museum of visual culture in Hong Kong, which is scheduled to complete in 2017.

Due to open at the end of 2016, the Shekou Museum is part of Maki's Shenzen Sea World Cultural Arts Centre project, which is already under construction. It will host a permanent gallery space for the London institution as well as offer additional space for it to present major exhibitions.

Flat roofs will host gardens and public terraces, while the entrance area of the concrete and steel structure will feature a triple-height glazed atrium. 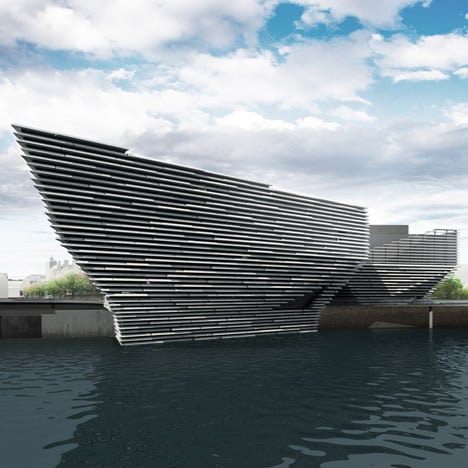 In a statement released yesterday, the V&A said it had signed a "collaboration agreement" to support China Merchants Group with its plan to develop "the first major museum of design in China".

"The new design museum located in Shenzhen aims to promote Chinese design to an international audience, as well as present the best international design in China," said the V&A.

It will advise the Chinese museum in the development of its own collections and train its senior management team, with a senior V&A curator moving to Shenzen for three years.

Talking to Dezeen in 2012, curator of the M+ Aric Chen said that he would not be "duplicating the efforts of other museums" like the V&A, which tended to put Asian design on the periphery.

"I see our Hong Kong perspective as being something very organic, natural, and hence perhaps more authentic," said Chen.

More about the V&A