News: American firm SOM and Danish studio Entasis have triumphed in a competition to design a skyscraper for Gothenburg that will be more than twice as high as the Swedish city's current tallest building.

With a proposed height of 230 metres, the Polestar Tower will tower over the 100-metre Gothia New Tower – the city's tallest tower at present.

It features a design that "takes inspiration from ribbons blowing in the wind".

SOM – who also designed the Burj Khalifa in Dubai and One World Trade Center in New York – teamed up with Copenhagen-based Entasis on the proposal, as part of a 14-hectare masterplan for the post-industrial business district north of Götaälven.

SOM design director Kent Jackson said his team plan to "deliver a great design and city district for the people of Gothenburg". 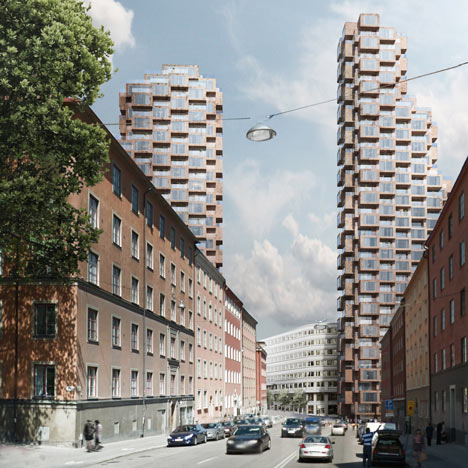 The residential tower will form the centrepiece of a cluster mid-rise buildings, positioned over several mixed-use podium blocks.  It will accommodate a mix of apartments, including single storey flats and duplexes.

Other facilities will include a public restaurant, a gym, a residents' lounge, a podium-level garden and a rooftop observation deck overlooking the city and the waterfront.

As part of the masterplan, the design team also proposes a ring of landscaping that links key sites within the city and creates a new park through the realignment of Lindholmsallén. This will be completed to celebrate Gothenburg's 400th anniversary.