London-based designers Bartek Arendt and Kasia Bedra have built a barn-inspired house in Poland with a sloping triangular roof, designed to stand as an abstract object in the landscape (+ slideshow).

Bartek Arendt and Kasia Bedra designed 34.25° House in response to a challenging site and restrictive planning regulations. It faces north, overlooking Radunia river in north-west Poland, but had to be at least 100 metres from the water, which meant building near a neighbouring house to the south. It also had to have a pitched roof with the ridge parallel to the street to reflect the style of the barn buildings typical to the area.

To satisfy these conditions, Arendt and Bedra tilted the house beneath the roof ridge 34.25 degrees north-west, to face the valley.

"It allowed us to make better use of morning light in the bedrooms, which are on the south and east side of the house, and afternoon light in the living spaces and the terrace on the north-west side," Arendt told Dezeen. "It also provided more privacy, in case any new homes are built next door. In such case, the views and the secluded terrace would remain unaffected." 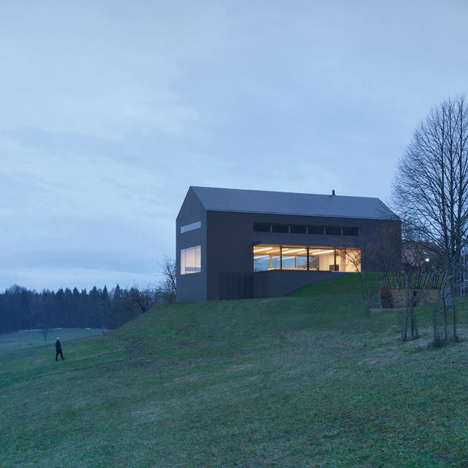 Tilting the house also freed up land in the south-west corner of the plot so the residents can grow fruit and vegetables.

"Since the plot lies on the northern slope, it is relatively difficult to grow any fruit or vegetables, so it was important to preserve the largest possible part of the plot with south-west exposure," said Arendt. "The tilted orientation of the house allowed us to do this, leaving the majority of the plot in the sun."

The two-storey house has an open-plan kitchen, living space and dining area on the ground floor, with large windows on the north and west sides to maximise views of the valley.

Upstairs, three bedrooms, two bathrooms, and the corridor connecting them are arranged in an L-shape around the double-height void above the dining room.

"We wanted to achieve maximum connectivity inside, in order to allow the inhabitants to interact better and celebrate togetherness," said Arendt.

The staircase and hallway also double as a gallery for the residents’ art collection.

"One of the challenges was to provide space for the collection, but not compete with the views and landscape, so we created a sort of gallery which starts at the base of the staircase and unfolds as you walk up, opening up towards a tall canvas wall on the first floor," said Arendt.

Grey concrete bricks have been used for the facade, which are common in traditional houses in the region, and help to break down the mass the house. Painted sheet metal has been used for the roof to maintain the home's uniform appearance.

Windows are set slightly back from the facade to line up with insulation used in the walls, in order to minimise heat loss during the cold winters.

The entrance has been designed as an alcove in the south-west corner to preserve the sculptural form of the building, and provide shelter from wind, snow and rain. Its red colour contrasts with the grey bricks, and creates a visual connection with the surrounding area.

"Red seemed like a right choice, because it works beautifully with the colours of the meadow – the green of the grass, the red of poppies. It's also very common in traditional regional houses and gardens," said Arendt.

Photography is by Bartek Arendt.

Here is some more information from the designers:

The house sits at the top of the valley shaped by Radunia, a small river in north-western Poland. The plot overlooks a picturesque landscape, with numerous hills, fields and forests.  Despite the beautiful location, the site featured some challenging topographical and zoning conditions that called for an unconventional design approach. Local development plans defined that any new building must be constructed at least 100 metres away from the riverside, which left only a small part in the corner of the plot to be built on.

In order to maintain the visual integrity of the built landscape, the zoning regulations require all new-built houses to have pitched roofs of a given angle, echoing traditional Polish rural architecture. They also stipulate that all ridges of the pitched roofs are oriented parallel to an adjacent street.

The plot is located at the end of a cul-de-sac, shares a border with the neighbouring house to the south, and is accessible at the north-east corner. The remaining part of the lot slopes northwards towards the river and the natural landscape of the valley. Such a topography calls for a scheme that on the one hand utilises maximum natural light, but takes advantage of the views and provides maximum privacy on the other.
The client's brief asked for a simple scheme to satisfy all needs of a resident couple, occasional guests and enough space to showcase an extensive and ever-growing collection of artwork and heirloom. It should also be compact enough to minimise heat loss during heavy winters.

The brief, the requirement to follow the zoning regulations, and the intention to conform to the traditional rural landscape led to an early decision that the design should resemble an archetypical barn house as closely as possible. However these initial constraints were soon revisited as these presumptions had not provoked any satisfying results.

Instead, the more logical solution was to rotate the barn in such a way that it made maximum use of the site. However rotating the plan required the roof ridge to be oriented diagonally in order to line up with the street axis. This move changed the appearance of the house from a familiar barn shape to an abstract one.

The dimensions of the rectangular shape in which the layout is inscribed and it's rotation of 34.25° were achieved by numerous iterations. Each study was driven with the aim to optimise the plan, achieve enough sunlight exposure in living areas and on the terrace, provide enough views and privacy from neighbouring sites, and align the roof ridge parallel to the street.

The proposed scheme clusters all of the utility and mechanical spaces at the entrance side of the house and opens the communal living spaces towards the river and valley on the north-west. The space opens up not only in plan but also in section, integrating the landscape with the interior, and despite the northern orientation, it provides enough sunlight.

The distinctive shape achieved by rotating the traditional pitched roof diagonally to the plan resulted in an abstract solid form and informed material choices. Informed by construction materials of traditional houses in the region, and in order to break down the mass and add another reading of scale while approaching at ground level, brick was used as the primary facade material. In order to maintain the simplicity of the building mass, a grey concrete brick was selected.

Similarly, a simple roof cladding which could maintain the uniform appearance of the house, free composition of windows and a carved-out corner entrance, which is taken as precedent from traditional dwellings, are designed so that the house stands as an abstract, solitary object in the landscape.