Measuring just four metres wide, this glass and concrete cultural building has been inserted between an industrial district and a historic 17th century house in Incheon, South Korea (+ slideshow).

"It is a new building in an area which is between a residential area and an industrial area," said Joo Won Moon of Korean office Studio GAON. "We tried to make a connection between those two contexts by inserting such a cultural facility, which resembles a book." 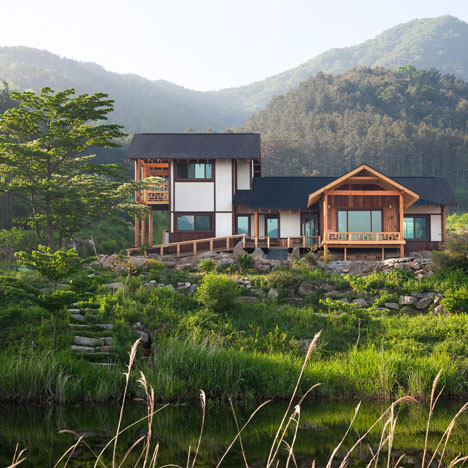 House in Geochang by Studio GAON

Designed for use by the local community, the Sinjinmal Building is in Gajwa-dong, a suburb of Incheon that was once faced the sea but which is now landlocked thanks to land reclamation projects.

"Imagining the sea around this area seems almost impossible," said Studio_GAON, who also designed this retirement home for an elderly couple in the Korean countryside. "Today, roads full of high speed vehicles are surrounding this land, instead of sea."

Instead the area is now home to a mixture of timber mills, construction sites and factories. "The grain of the town couldn't be found," the architects said, "just like a man with his fingerprints faded by rough years."

The west side of the building faces a 400-year-old traditional Korean house and on this elevation the architects designed a zig-zagging timber stairway linking the first floor to the ground.

"This was homage to the faltering stairs in Sigyeongjeong Pavilion in Gwangju, Jeonllanam-do, which was so impressive that we wanted to try it sometime," the architects explained.

The narrow site, measuring four metres by twenty, became available when the owner of a neighbouring site measured his plot and realised he owned more land than he thought: "It transpired that the land that he knew as the neighbour's land was actually his land."

He asked Studio_GAON to design a building that would serve as a boundary between his property and the neighbouring industrial buildings.

"The site was a land which suddenly came out without any specific program, without any context," said the architects. "The shape of the land was so simple, and the program was 'nothing'.  It could be the most wanted situation for an architect to have freedom to design. We suggested fixing a book in."

The design approach was to create a long building that created a screen against the industrial buildings on the southern side, while opening up the north side to views over the owner's land and the residential areas beyond.

The exterior is finished in wood-grained cast concrete while the interiors are finished with cement blocks. The second floor, which will be used as a seminar room, is stepped and features a full height, full width glass and steel door that pivots open horizontally by means of a manual winch. This opens onto a terrace that overlooks the neighbouring 17th century house.

"We think the biggest characteristic of Korean architecture is 'dynamics' via the reiteration of spaces to induce dozens of layers and movements," say the architects. "To suggest the dynamics, we made the floor slab of the 3rd floor like stairs."

"The stairs on the north side crossing the curtain wall were painted in gaudy red," they added. "That line is suggesting past time, present, and future alterations."

Here is some project data from the architects: